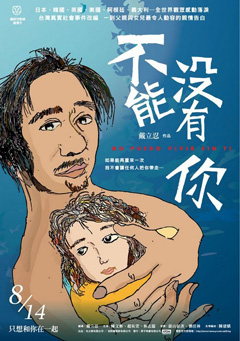 No Puedo Vivir Sin Ti (Cannot Live Without You) is a Taiwanese film about a man and the strong bond between him and his small daughter. Because he’s unemployed, he takes on dangerous diving activities to make ends meet, but all in all, both seem happy to be together. When he decides to enroll his daughter in the local school system, the government decides that she’d be better off with another family.

Why is the film titled in Spanish? I really have no idea. The film, which was selected by Taiwan to be the official entry for the upcoming Academy Awards and has just won Best Film at the Golden Horse Awards, might not be everyone’s cup of tea. It’s shot in black and white and even looks very grainy in some scenes with a hand-held camera, but if you’re willing to see passed these things you will be moved by the scenes with him and his daughter.

From a logical point of view, you would think he’s really not suitable to take care of his own daughter, having her not attending school and living in precarious conditions. However, you never really see him leaving the kid unattended since he takes her on the boat while he is diving. One of the scenes there was very touching, in which he is in the water and the kid just looks into it pretending to watch over him.

Yes, the film is technically faulty, but it also shows the great relationship that a man and his daughter can have, and that’s more than many other films out there can accomplish with millions of dollars. Plus, there’s nothing wrong with introducing some family values in a world that seems obsessed with sex and violence.