Cranes Are Flying, The 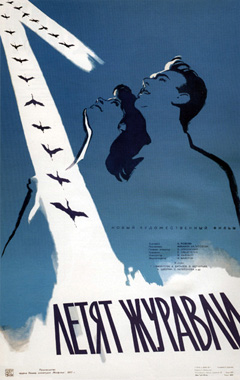 I’ve continued my exploration of Russian cinema with a film that had been sitting on my “to watch” list for more than two years just because I was attracted to the title, The Cranes Are Flying. My expectations were high because it had very favorable numbers not only on MUBI, but also on IMDb, and it’s one of those movies that graces the Criterion collection with its presence.

The Cranes Are Flying is a story that follows a young couple — Boris (Batalov) and Veronika (Samoylova) — who are in love and have everything ahead of them until World War II begins and Boris enlists to defend Russia. That’s all you need to know. Though, the film’s storyline is quite simple (bad things happen, but Veronika keeps on moving on), what makes this strike cinematic gold is the gorgeous visuals. Each and every frame of this is breathtaking from the get-go, the carefully shot beginning with the perfectly framed high contrasts, to the dizzying handheld camera (that now plagues our action movies), to the outstanding flashback sequence with Boris and the spiral staircase, to the devastating realization of Veronika in the sea of her elated countrymen. It’s all a visual fest in black and white.

This also has got to be the most subtle propaganda film I’ve ever watched, especially in contrast to films like North Korea’s The Flower Girl. Throughout its one and a half hour of running time, you’ll barely see any government highlights and most of the war setup is filled with families (and lovers) parting ways, destruction, and choosing to focus all our attention on the drama Veronika is going through these difficult years. It isn’t until the very end when Veronika is (almost too forcefully) made to forget about her sorrows in favor of what these sorrows did for her country. Tatyana Samoylova is incredible in this with all the close-ups her face had to endure, be it during the tell-off by his father in law (Merkuryev) or the super subtle was-it-rape-or-not scene with actor Aleksandr Shvorin.

My only criticism, if I have to have any, is that I didn’t connect with any character, not even Veronika. I knew horrible things were happening to her, but I just couldn’t bring myself to cry for her. I just felt really bad for her. I know some people don’t like melodrama, but I felt that emotional connection was lacking for me. The Cranes Are Flying is an outstanding piece of filmmaking, but it’s left me a bit cold.

Does it require multiple watches? Obviously! If a high definition release isn’t planned, a proper DVD release will have to do.

You can watch The Cranes Are Flying on Mosfilm’s official YouTube channel.