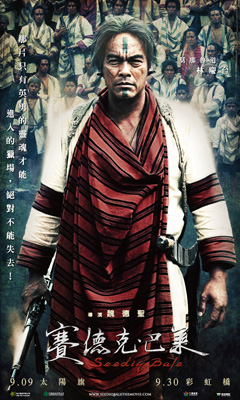 Color me surprised to find out that Seediq Bale had opened in selected theaters in America over the weekend, even if it had been in its International cut. If you ever EVER have the chance to catch the two-part cut, clocking at nearly 4.5 hours, you should probably check it out.

This historical epic — the most expensive Taiwanese movie ever made at $25M USD — directed by Wei Te-Sheng depicts the Wushe Incident, in which the Taiwanese aborigines rose against the Japanese, killing over 130 of them — including women and children. So to tell you that Seediq Bale is violent is probably an understatement. It’s raw and quite authentic, there’s definitely no washing down the violent times, enough action to satisfy the rowdy ones, and loads of drama to keep the masses all interested.

Before watching this, one probably needs to read a little bit about Taiwan — a country as varied as any other with a rich historical background that includes the Taiwanese aborigines who inhabited the island way before the first Han Chinese arrived to make commerce, and definitely before the Emperor of China gave the island to the Japanese with the Treaty of Shimonoseki in 1895 — before Japan got imperialistic on all of us.

The Japanese developed railways and built villages with houses, hospitals and schools — in short, they brought civilization to the port cities, explaining why Taiwan doesn’t hold as big a grudge like other Asian nations. However, like any story in the world, some were happy, some weren’t.

After being warring and hunting tribes, the Seediq Bale tribe felt oppressed, often looked down upon by the Japanese who considered themselves the superior race. Against that injustice, all the “Warriors of the Rainbow“, led by chief Mona Rudao (Lin), set out to become men.

To tell you the truth, Seediq Bale is nearly perfect reaching the end of Part 1, peaking when the Wushe Incident finally happens, weaving an intricate interaction between the rising Seediq warriors, the Japanese who looked down on them, the Seediq who didn’t want to fight, and the Japanese who treated them fine. In fact, to me, Seediq Obing Nawi, who adopts the Japanese name of Hanaoka Ichiro (played by Hsu Yi-fan), was probably one of the most interesting characters in the film, showing the complicated historical crossroads most people were at.

By the beginning of Part 2, I thought I was watching a masterpiece when in an unexpected turn of events, there’s an even more emotional scene involving mass suicide. However, Seediq Bale then turns from the Wushe Incident and begins depicting the results — more war, more deaths… all in the name of honor and some sense of pride. The film really did lose me because I had lost the emotional connection to Hsu Yi-fan’s character, while seeing Seediq fighting against Seediq didn’t affect me as much as Taegukgi did when I saw brother fighting against brother in the Korean war.

Overall, Seediq Bale is a film that contains a lot of gray areas — disregarding how much they wanted to portray the Seediq Bale as heroes, in the end. However, it’s a film of great effort that oftentimes pays off enough to make you feel like you haven’t just wasted nearly five hours of your life. If you love watching the history of the world through film, here’s your chance.