Leafie, A Hen into the Wild 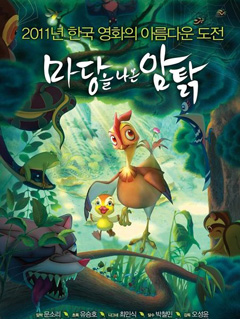 It’s easy to look down on animation, especially the kind with talking animals, because Hollywood has spoiled us good. However, not since 1981 when Disney released The Fox and the Hound have we found talking animals interacting with each other and being confronted with the natural order of things.

That’s the case of Leafie, A Hen into the Wild — based on the successful 2000 book by Hwang Sun-mi, which has been translated into a number of languages (Japanese, Chinese, French, Polish…), and it’s set to be released in English under Penguin Classics. The movie follows a farm chicken, crazy, egg-laying Leafie (Moon), who dreams of escaping her egg-laying prison to explore the wilderness and freedom of… the yard.

Against the better advice of a hyperactive flying bird friend, she sets her escape plan in motion, freeing herself and shaking the status quo: where’s a farm chicken to go when she escapes the farm? Leafie, in all her eagerness to live life to its fullest, forgets the dangers of the natural world when she has an encounter with the One-eyed Weasel (Kim) and a cool, hair-flying mallard duck whom she names The Wanderer (Choi), who later entrusts his unborn child to Leafie.

The animation style in Leafie, A Hen into the Wild seems distinctly Korean, due to its painting-style layouts and backgrounds, but it also feels modern. Though the film is in classic 2D animation, at times it seems to be distinctively mixed with key 3D elements — like the ducks scene. With a budget of only nearly $3M USD (which is like 1% of a budget for a Pixar or Dreamworks flick), Leafie makes every dollar count. The film had some very scary moments involving the One-eyed Weasel, which made me jump once or twice, which would mean little kids would get scared (unless I’m a puss now), but overall it’s got a nice balance of excitement, comedy, drama and cute moments to entertain the whole family.

What sold me on the movie, though, was Leafie. That chicken is crazy, but she wins you over and she makes you bawl. We look at the young duck (Yoo) wanting to belong, and we know, we understand what’s about to happen. Leafie realizes too, and it all builds up to that moment, very much like THAT moment in The Fox and the Hound when Tod (the fox) and Copper (the hound) must part ways because they’re natural enemies. Of course, I’m not telling you the whole story because I don’t like to spoil things completely, but that ending~

Talk about the circle of life.

The screening times for Leafie, A Hen into the Wild at the 3rd Korean Film Festival in Australia are: