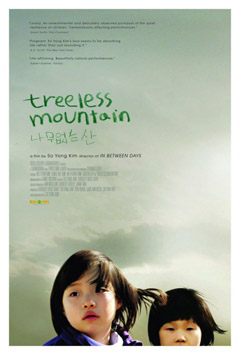 Treeless Mountain is the heartbreaking story of two girls, 6-year-old Jin (Hee-yeon Kim) and her little sister Bin (Song-hee Kim), who were living in Seoul with their mom until the day she tells them that they must go to their aunt’s place. She tells them they must stay because mom has to go find dad. However, before leaving she also gives them a little plastic piggy bank, and tells them that when they fill up the piggy with coins, she’ll be back.

With innocence, like any normal kids, they believe and spend their days living with an aunt that doesn’t seem to want them there. You see them struggle, until Jin begins to realize that nobody really wants them… until the end of the film, which is the saddest realization a 6-year-old could have.

If you have small kids in your family, you’ll want to hug them forever and never let them get hurt. And if you get the kids in your family to watch this, they’ll probably appreciate you even more as a parent or guardian. Of course, you might want to hold off on sad realities until they’re old enough not to grow up depressed.