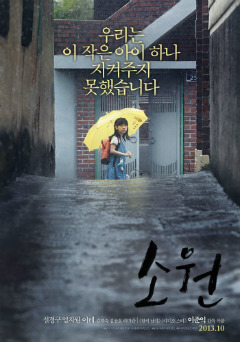 Korean cinema (and its western fans) likes oftentimes graphic revenge films, but they also love its melodrama. This is my third film of the year featuring parents’ worst nightmares with as varied genres as De Behandeling, Siddharth, and now So-Won (which has been translated to Hope).

Based on the infamous 2008 Nayoung rape case [1], this follows the lives of the Im family members, absent-minded but hard-working dad Dong-hoon (Sol), worrisome but caring mom Mi-hee (Uhm) and their precocious 8-year-old So-Won (Lee), who gets sexually assaulted on her way to school. Through the terrible physical and emotional ordeal, Dong-hoon must repair the bond between father and daughter.

In my movie-watching history, I had cried quite a bit in key scenes [1], but there are only two movies that have made me cry throughout its almost entire running time: Feng Xiaogang’s Aftershock in 2010, and last year’s Miracle in Cell No. 7. Though I didn’t cry during the two hours of So-Won, the tears overflowed for a good 50% of it because it’s such a difficult theme to deal with, while your brain argues whether you’re being manipulated into feeling these emotions, and the outrageous ending might seem too much to handle, but it all happened. Storytelling-wise, it all happened. They’re not playing with you. These emotions they were all real, as you’re immersed into this story and you become privy to this family’s life, wearing the shoes of that father who cannot be left alone with his daughter, and all that he goes through to reach her heart once again.

Not everything is desolation and dread, though, as the family healing does bring lighter moments, especially with the first scene of “laugh” therapy that So-Won receives from her mother dressed up as her favorite cartoon character, and the heartwarming decision of her father to get any costume just to be able to be with her.

Unlike other films that might focus on the crime, So-Won focuses on the healing processes, as we see the parents going through a natural character arc from their first reaction to who they finally become. However, while technically the film features strong performances and good cinematography, the score gets in the way with swelling music to get you going. One can’t help but think of it as a plain hammy use of it.

Overall, though, the script does deal with important issues in regards to sexual crimes and how it not only affects the actual victim of the abuse, but also those surrounding her, something that we don’t regularly see on film for fear of being too melodramatic… or fit for the Lifetime channel, so let’s leave it to Hallyuwood.

I still can’t believe the result of the case, though.