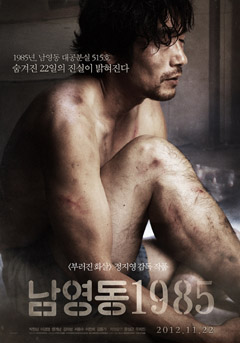 National Security uncovers a very dark side in South Korea’s history, addressing the tortures that, in the past, were inflicted to innocent people when they became suspects of conspiring against their country in favor of North Korea’s communism.

The film was based on the memoir by Kim Keun-tae, a democratic activist — in the film called Kim Jong-Tae (Park) — who was kidnapped and tortured for 22 days under the orders of gruesome police inspector Lee Geun-an, better known as The Undertaker. The events took place in 1985, but Kim was released and later became the Minister of Health and Welfare from 2004 to 2006, even suffering from severe post-traumatic stress disorder. In 2006 he was diagnosed with Parkinson disease, which was considered a consequence of the tortures, and died in December 30 2011, at the age of 64.

The story here basically consists in showing meticulously the techniques of torture and the sufferings and traumas caused on a human being. This is extremely uncomfortable; so if you don’t have stomach for strong content, don’t watch it because it may disturb you. The tortures start with the usual beatings followed by sleep and food deprivation, to soon be changed to water torture in its numerous variations and electric shocks. Most of the torturers showed a sadistic happiness on their faces, especially The Undertaker who was continually whistling while testing the victim’s limit.

Chung Ji-Young’s accurate direction along with the solid performances by Park Won-Sang and Lee Kyoung-Young as Lee Doo-Han (in the role of Lee Guen-an), didn’t hide some faults and lack of ideas on the screenwriting, which was pretty much repetitive along the way. I believe that the film would have benefited if the interviews with the real victims of torture presented in the end, were alternated along the story. Increasing KimJong-Tae’s life scenes from the past and dreams involving his family were other possibilities that certainly would avoid so many people to abandon the theater in an early stage, making National Security a somewhat lighter experience.

Nevertheless, we have to praise the courage to denounce these harrowing practices, even if we have a film that in 90% of its content only shows us pain, agony, and fear. I wonder if all these explicit images were truly necessary to make a clear point of view on the case. Lying or not lying, the result was always cruelty, and in the end, even I felt ready to confess anything in order to stop witnessing those distressing and fatiguing atrocities.