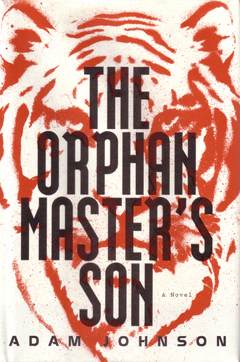 “He considered sharing how there was only one penalty, the ultimate one, for questioning reality…”

Jun Do is not an orphan until he leaves the orphanage, not a sailor while working on a sailing ship, not the Jun Do who took a shark bite for his comrade or who died a national hero. Jun Do is the name he gives himself and takes away from himself, no matter what government officials do or say.

For this North Korea-set novel, American author Adam Johnson consulted with experts and defectors during his research. Much of the atmosphere rings true with the little I’ve learned about the DPRK from news reports, documentaries, and Guy DeLisle’s Pyongyang, a graphic novel nonfiction account of a business stay in the capital. Yet a word here, some phrasing there, and various paths of thought throughout strike unconvincing tones. One might think, “Does this really sound authentic?” even with consideration of the author and his vision of North Korea. Questions like this foster a background dissonance while reading, never fully overcome by the story and characters’ engaging drive against defeat.

Author Catherine Chung wrote this about the  novel:

The Orphan Master’s Son is a wildly entertaining story, raucous, riveting, filled with big dreams and reckless chances, and an epic fight against injustice. Yet as I read it, I found the sensibility as all-American as you can get: the protagonist felt entirely Western in his concerns, in the way he spoke and thought, in the way he interacted with the world and authority—and it struck me as I read it that it was a quintessentially American story that tells us nothing about North Korea itself, but uses certain facts about that unknown country to constitute the backdrop of an old American story about the quest for personal freedom. And while it relentlessly criticizes North Korean propaganda, it somehow remains blissfully unaware that it becomes itself an insistent piece of propaganda for American values.

The Rumpus.net – YELLOW PERIL AND THE AMERICAN DREAM

Cowboy elements do occasionally sprout within a rollicking plot that branches out to Japan, the ocean, and even Texas. However, to me it read more like Cold War suspense than a western: contemplative but constant, romantic at a distance, and overwhelmingly gray. There are also a few humorous “sneak-attacks” of criticism on aspects of the United States. Chung’s analysis, however, gives apt and welcome criticism against praise like this oblivious back-cover-quote from  Publishers Weekly: “Johnson’s novel accomplishes the seemingly impossible: an American writer has masterfully rendered the mysterious world of North Korea with the soul and savvy of a native.”

The Orphan Master’s Son weaves its Part One- Part Two split into the themes of the novel, working towards a shuttling of viewpoints from characters’ unraveling of notions of identity and reality. One wonders, though, if the acclaim is drawn primarily toward the subject matter. Are the parallels and tight plot circles convenient coincidences, or do they actually come about through the determination of the characters? Though the novel riffs on the ambiguities of love —between lovers, family members, or citizen and country— does this quality make the romances and departures any less basic and predictable? Does Johnson use gradual pacing and totalitarian horrors to play political thriller entertainment in the “higher” mode of literary fiction? Perhaps this novel’s main appeal is the illusion of safe entry into the agreeably “exotic;” an illusion of the extraordinary elevating its satisfactory competence, an illusion that shushes questioning critique among this novel’s admirers.