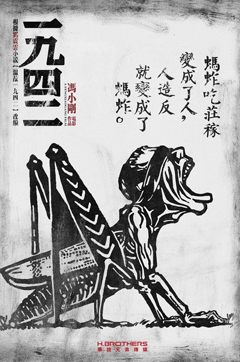 Back after his blockbuster hit Aftershock, Feng Xiaogang helms an 18-year-old production. Based on the novel (and adapted to screen) by Zhenyun Liu and simply titled 1942, the film chronicles the devastating 1942 famine that hit China’s Henan province, which displaced around 10 million people and killed 3 million, right in the middle of the Japanese invasion of China and World War II.

And when I say chronicle, I really mean it. It follows the Fan family, headed by Master Fan (Zhang G.L), a rich man who’s fleeing Henan because of the upcoming Japanese army trying to gain on the Kuomintang territories, pointing out to his daughter Xingxing (Wang) that they’re different than the famine refugees and that they’d be back home in no time. This is in contrast to his poorer neighbors, really headed by Huazhi (Xu), who are escaping because they haven’t had anything to eat, hoping to find something to hold onto in Shaanxi.

I’d like to point out that Google Maps currently puts Henan and Shaanxi at 512 km. apart or 106 hours away by foot [1]. Imagine having to endure that with no roads, carts packed with the stuff your family owns, pregnant women, children, the elderly… all of them starving to death in the dead cold winter. It’s no exaggeration when I tell you that the film follows these people’s “downs and downs.” That’s exactly Back to 1942 ALL THROUGHOUT THE MOVIE. It’s its biggest feature, but also it’s biggest handicap. As a historical account, it’s devastating seeing dreadful thing after even more dreadful thing, with very apt clinical storytelling — and cold color palette — of how the government, incapable of handling its own corruption and overwhelmed by the foreign happenings, kept giving misstep after misstep. Right at the center of it all was the Generalissimo Chiang Kai-shek (Chen) and his appointed trustee Henan authority Li Peiji (Li X.J), whose storylines give the historical political tones to the film.

It really is no wonder people flocked to see Ang Lee’s Life of Pi instead of Back to 1942 during the holiday season in China. Disregarding my watching this so close to Chinese New Year, who in their right mind would watch such a depressing film during Christmas? Whereas the story in Life of Pi showed hope in the time of great need, Back to 1942 shows one of the darkest periods in Chinese history in which every man was for themselves — cannibalism, the selling of family members or their own bodies, and not even religion would save them. In one of the two scenes with Tim Robbins as Father Megan, Father An (Zhang Hanyu) tells him he’s a deserter for leaving the hoards of starving people, while he’s gone to Father Megan’s impeccable church, getting what little is left to eat in the region. Leaving religion less than halfway through our journey, Back to 1942 reminds us that this is a story about misery, and there’s no sugar-coating it at all. “A life is worth two cookies,” exclaims Xu Fan’s character, and its excruciatingly painful.

The only downside to it all is that Back to 1942 really is an “all down from here” type of story from the very beginning, there’s no pulse to it. It sinks lower and lower until all you can really say is, “Oh gosh” to the very end, until you hear the voice-over of… what I suppose is author Zhenyun Liu, whose grandmother survived the famine.

You can get the movie in the Hong Kong version of the Blu-ray with English subtitles, as well as the DVD version.