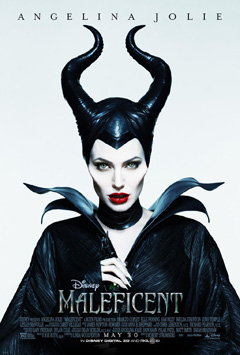 Let’s be honest, whenever any big company wants to revamp a property, the first thing in our minds is “money-grab,” but that quickly gave way to excitement when the first promotional material was released… and then came the trailer [1][2]. It really couldn’t be more perfect than the biggest movie star in the world playing one of the most fascinating Disney baddies in fairy tale history.

After Disney famously took the forever-told tale and made it into their 1959 Sleeping Beauty version, which boasted some very impressive color design in its most eerie scenes, we wondered what modern spin they would give their re-telling in Maleficent. After a mix bag of Enchanted, The Princess and the Frog, Tangled and Frozen, anything was game- Would they go for the True Love Kiss ending, mirroring the eye-roll-inducing Snow White and the Huntsman? You know Theron deserved to win that one.

My expectations of Maleficent were met with flying fairy colors.

Though Woolverton’s script doesn’t follow the original darker versions, it does give Maleficent a simple backstory of girl-meets-boy in idyllic fairy setting that reeks of warning tales for young 16-year-olds looking to share “their true love kiss,” and being burn for trying, or maybe I’m just too much of an adult now, but remember these stories were used metaphorically. This betrayal is what sets into motion everything that occurs in the Sleeping Beauty world with much more zing, and added Angelina Jolie pizzazz.

Visually speaking, the film is a mix of Alice in Wonderland weird fantasy with darker serious Huntsman meets Game of Thrones textures. Hit or miss for some who blatantly hated either of the first two, however, if you’re going to enjoy this do it for Angelina who glides through the role as if she had been born to play it. There’s definitely some ass-kicking involved — I was reminded of Superman Returns in you-know-what-shot — a certain sardonic flare to her sass and, most importantly, tenderness.

The rest of the cast is good with Copley edging Fanning due to character importance, and Sam Riley who was capable to stand his own ground when he shared all his scenes with Jolie — and thankfully it didn’t turn into anything creepy! One minor problem I had with the film was that I did think the three fairies Knotgrass (Staunton), Flittle (Manville) and Thistletwit (Temple) were bordering a fine line of annoying. There’s only so much clumsiness you can take, which the 1959 version provided, but they were really pushing my buttons on this one with their ineptitude. I also didn’t get why they attended Aurora’s Christening, because they seemed to get along with Maleficent.

The resolution was near pitch perfect for me- your Shrek/Princess Fiona Shrek kiss or Frozen moment. Well-handled and emotional enough before you start fuzzing and fist-pumping for the big battle, but before you can ride that high out of the theater, your mood is ruined by a bland Prince Phillip. Really, why did they even bothered with that.

Other than that, please, bask yourself in the glorious Jolie, who joins the ranks of delicious fairy tale baddies on re-imaginations of our favorite stories. Now… will Blanchett deliver?