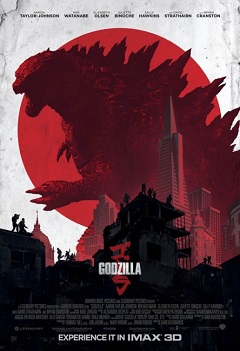 As far as the inevitable comparison people will make to this year’s Godzilla film adaptation with the 1998 one, this one is definitely better and more interesting to watch. But I’m afraid I’ve got some bad news: this latest entry in the franchise wasn’t all that great thanks to some things that frustrated my viewing.

Gareth Edwards’ take on the monster actually got off to a really great start as the credits roll and we head into the 50s with footage of bomb testings which implied the first time Godzilla existed. It was great to see the title sequence revealing the cast with words being blacked out or censored, as telling the audience that something is being concealed from them. That point is also seen through Joe Brody (Cranston), a scientist who lost his wife Sandra (Binoche) in a nuclear plant accident at Janjira, Japan, back in 1999 and doesn’t buy the idea that the accident was attributed to a earthquake.

Fast-forward to 2014 and we see Joe’s son Ford (Taylor-Johnson) all grown up working as an explosive ordnance disposal officer in the United States Navy, living in San Francisco with his wife (Olsen) and son (Bolde). Ford pays his dad a visit in Japan after hearing the news that he got arrested. When they meet, however, similar events start happening, though it takes a turn for the worst.

As mentioned before, Joe senses that the authorities have been hiding something for a long time. What is it that they’re hiding? I’ll tell you this: it is big, but it’s not Godzilla. And it feeds on radiation.

The above sounds interesting and Bryan Cranston was really great, selling grief and hysteria like a pro as well as working well his strained relationship with Ford. However, Godzilla loses momentum when Aaron Taylor-Johnson is pushed into the lead role and gets a good chunk of screentime; his presence and performance wasn’t good, and it took away tension and interest from the film. Though he is the least interesting character, he’s not the one that should be blamed for the weak spots, as the direction and screenwriting tries to aim for a film that resembles Super 8 in terms of not fully showing the main attraction -minus the human interactions that made J.J. Abrams’ film a treat to watch- and trying to aim for the gritty atmosphere from Nolan’s Batman series along with nods towards Steven Spielberg and Alfred Hitchcock. I’m fine with that as long as both human development and spectacle goes hand-in-hand, and remains interesting and compelling to watch, but it wasn’t like that for the most part. Cutting off an interesting action scene involving Godzilla just to abruptly go back to something else was definitely bad editing, just to cite one example.

With the exception of Cranston’s Joe and (to a certain extent) Watanabe’s Dr. Serizawa, who is behind the research of the seismic activities in Japan, it was hard to care for the hardly developed characters, and the first hour felt pretty frustrating especially with the feeling that Godzilla came across as a bit player in its own film. However, when the monster emerges on screen, Godzilla gets some much-needed life and tension, which makes the film wonderful in terms of visuals, scenery — that skydiving shot set to Jupiter and Beyond from 2001: A Space Odyssey was amazing to watch — Godzilla being both a bad ass and graceful kaiju, monster — or “M.U.T.O.” (Massive Unidentified Terrestrial Organism) as David Strathairn’s character calls them — brawls and destruction. I really wish the film featured more of the monster than the humans that were shown on screen. Or if one human being should have been the lead, it should have been Cranston’s Joe instead of ATJ’s Ford.

Regardless of my opinions, Godzilla can still be enjoyable to watch as long as you’re strictly here to see the monster itself. But if you want a film that mixes well the stuff Godzilla didn’t pull off well (except for its grand spectacle moments, which were worth the watch), you can check out Pacific Rim instead.