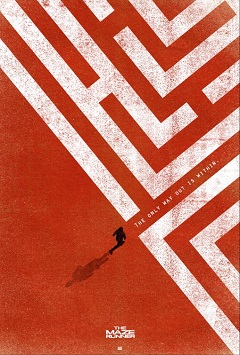 It’s inevitable to compare The Maze Runner with The Hunger Games since both are YA series that share the same type of atmosphere and the things they revolve around live by an established set of rules. The Maze Runner is not only centered around the maze itself, which constantly changes, but it also follows a community called the Gladers.

The Gladers, led by Alby (Ameen), haven’t been able to escape the maze for quite a long time, but they have managed to survive thanks to their strict obedience of rules as well as successfully administering their supplies that are given to them once a month along with the arrival of a new teenager. However, they cannot remember how they got trapped outside the maze as well as not being able to remember their past lives at all.

The community gets their routinary survival challenged when newbie Thomas (O’Brien) arrives and questions everything surrounding him because he somehow remembers things from his past, but with complications. Things take a turn for the worse later on when Teresa (Scodelario), the first ever female to be sent to the Gladers, arrives with bad news for everyone involved.

While The Maze Runner got off to a very slow start, it was actually interesting to see the interactions around the Gladers for the most part. The performances from the entire cast are decent-to-good and they have good chemistry with each other. Dylan O’Brien as the main character fares decently and improves with time, especially through Thomas bonding nicely with Chuck (Cooper), the youngest Glader and both actors make you care about their characters much better when they’re paired. But I must say that Will Poulter as Gally stands out stronger than everyone else thanks to his gradual antagonist turn, triggered by Thomas’s arrival that changes everything for the Gladers and it doesn’t suit well for Gally at all.

As far as the maze is concerned, it shares some of the problems I had with the first Hunger Games film, in particular with the main attraction suffers from overhype and not being all that interesting to watch when compared to the build-up the characters received on both films. The Maze Runner boasts a bigger and more balanced supporting cast that feeds on each other very well. Also, it was great not to Teresa getting a romantic interest (for now). Even better, the big revelation regarding the maze comes across as a stronger (and sort of shocking) payoff for those viewing this without reading the books. But I must say that The Hunger Games beats this in terms of having a stronger main attraction (in film execution), a lead character with stronger on-screen presence (and better acting) and being less blatant about being a franchise by the time the first entry came to an end. You could have easily not done a follow-up on Katniss after the first entry, but The Maze Runner requires a sequel given its ending that solves the questions asked during the film and adds more for the sequel.

Is the film watchable? Yes. Wes Ball makes his directorial debut stand out quite nicely for a guy who debuts with a established franchise — a move done lately by Hollywodd to save costs on big franchises and not employ established directors — and while it was going to be tough for Ball to overcome making the maze interesting, he made up for that with his cast and milking well the big reveal. For that alone, despite its faults, I’ll put The Maze Runner ahead of something such as Maleficent, which deserved a better director despite having Angelina Jolie as a very enjoyable main attraction.