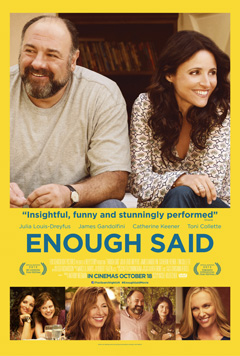 As crminal as it is for me to not see Julia Louis-Dreyfus ranked on Amy’s 100 fave actress ranking, it was easy to understand why: JLD is mostly known as a comedy tv actress (a living television icon who is currently kicking ass on Veep) and she hasn’t done much work in films — you have to go back to Woody Allen’s Deconstructing Harry from 1997 to actually see her face on screen. Somehow, 2013 had two films with her: one of them was Planes (I apologize for bringing that up) and the other is Nicole Holofcener’s romantic dramedy Enough Said, which also happens to star James Gandolfini (whose value on tv is grandiose thanks to HBO’s The Sopranos) in one of his final appearances.

Louis-Dreyfus stars as Eve, a divorced massage therapist living in Los Angeles who attends a party and meets two new friends: poet Marianne (Keener) befriends Eve and employs her services, but it’s Albert (Gandolfini) who befriends her and they start dating. While it may seem unlikely that a fat guy dates a good-looking woman, it’s clear that both Albert and Eve lived life a lot, yet their sense of humor and things they have in common [see: divorce, daughter going to college, bad luck in dating, etc.] ends up with them being in a relationship. However, while both Eve and Albert try not to talk bad aobut their exes, Marianne lays the smackdown on her ex-husband. Who is her ex-husband?

The answer to that question is obvious — even the trailer [1] spoils it, but an indie film needs a strong selling point regardless of its cast — but the way Nicole Holofcener presents real characters, plays with the concept of trust and develops different types of relationships in Enough Said makes the film worth the watch. Julia Louis-Dreyfus’ stellar performance and great chemistry with James Gandolfini should have made her an Academy Award nominee along with Gandolfini, but either voters forgot about them or maybe there’s a stigma against tv-made actors. Either way, while Gandolfini goes against type and greatly shows a sensitive side of him along with good sense of humor and makes Albert a very credible and charming love interest for Eve, Enough Said works more as a Julia Louis-Dreyfus showcase and she is a wonderful on-screen presence as Eve’s relationships with Albert and Marianne build up to the film’s selling point and the way Eve develops insecurity and neurocism because of what she learns about Albert and the decisions she takes based on the info provided is compelling to watch. If dealing with that wasn’t bad enough, there’s also the conflict regarding Eve not paying much attention to her daughter Ellen (Fairaway), who is about to leave home and go to college,  and instead takes Ellen’s best friend Chloe (Gevinson), who somehow is always available for Eve, under her wing.

As far as the supporting cast goes, most of them are pretty good to watch, especially Catherine Kenner as a sort-of antagonist and Tavi Gevinson, who stood out strongly and held her own against Louis-Dreyfus in spite of her character’s stay at Eve’s place being sort-of questionable yet funny. On the other hand, Toni Collette was somewhat underused and that is unsettling considering her talents. Collette’s Sarah is the only one who is married among the main cast and while she is important to Eve, she could have been used better to work as a stronger contrast against Eve, Marianne and Albert. Another character that could have been retooled something more interesting was Tracey, whose presence stood out a lot less than fellow young girls Chloe and Albert’s daughter Tess (Hewson, daughter of Bono). Other than those minor nitpicks, check this film out if you can because it’s easily one of the best films of 2013. Enough Said.