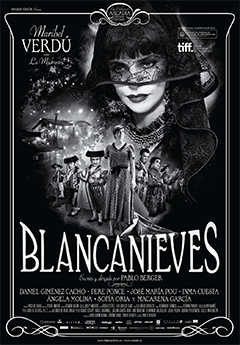 For all the awards it won for being a modern silent film, The Artist didn’t bring anything all that original to the table, leaving some wishing for a silent piece with some meat on its bones. In comes Pablo Berger with his own modern silent, an impressive little feature called Blancanieves.

Not only is Blancanieves a modern silent, it is yet another retelling of the Snow White tale that has risen over the last few years. With how disappointing both Snow White and the Huntsman and Mirror Mirror were, one would be right in being wary. Luckily enough, Blancanieves is far from traditional and has no interest in bludgeoning the audience to death with a meek young woman who relies on a man to save her time and time again. Instead, Berger chooses to craft a compelling new narrative out of an old and familiar tale.

Placing the audience in early 20th century Seville, the film begins by following the usual outline of Snow White’s tragic life. Here we see Snow as Carmen (García & Oria), a bullfighter’s daughter who lost both her mother and grandmother and was left to live with her sadistic stepmother Encarna (Verdú). Her father is kept under lock and key, paralyzed long ago during a bullfight, but Snow manages to find him, and he teaches her how to bullfight over the years.

When her stepmother tries to murder her after disposing of her father, Carmen finds herself with amnesia and in the home of the Los Enanitos Toreros, the bullfighting dwarves. It is through them that she finds the perfect opportunity to embark on a bullfighting career of her own, and is dubbed Blancanieves after the story.

Many have thrown around comparisons to some of Pedro Almodóvar’s earlier works, including but not limited to Matador, and it’s no surprise why considering it’s brimming with Spanish culture. One of the best things about Blancanieves is that it’s grounded in realism to a certain extent. Pablo Berger pushes the story to some fairly macabre levels, to the point where people quite literally have the opportunity to pay ten cents to smooch Carmen’s corpse in an attempt to bring her back to life in a cheap side-show manner.

There’s also more than enough melodrama populating the story to be mistaken for one of his works, and quite a bit of humor and tenderness amidst it. Thankfully, the acting never tips over into an over the top realm. Even when Encarna falls into the ridiculously wicked caricature one expects, Maribel Verdú never gives anything but an excellent performance. She needs no magic mirror to fuel her hatred of Carmen, but Berger presents her longing for attention through constant scenes involving her in front of a camera.

While Verdú is a force to be reckoned with, Macarena García is exactly the right fit for Snow White. She’s beautiful, she knows how to convey emotion through her expresses, and she wears that bullfighter outfit pretty dang well. One of García’s best qualities, however, is just how much chemistry she has with one of the dwarves, Rafita, played by the charming Sergio Dorado.

Rafita pines after Carmen often enough and makes a fine replacement for any Prince Charming, which is yet another great quality that the film possesses: a stunning lack of men who save women. The women of Blancanieves can take care of themselves. Encarna controls and murders enough men, although she does have another do her bidding every so often, while Carmen can fully hold her own against the bulls she faces.

Pablo Berger’s Blancanieves is truly a wonder to behold. It’s a blending of the classic films and tales we’ve all seen and heard, with a new and modern touch that makes it all the more pleasant and accessible. Few people can achieve the bittersweet beauty that this film brings to the table, and one can only hope that more films like this arise from the shadows.