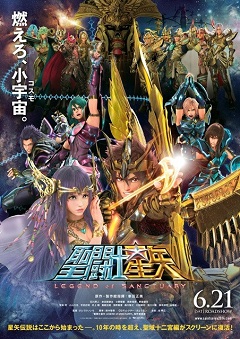 Saint Seiya: Legend of Sanctuary is based on the Saint Seiya anime, especifically the Sanctuary season. The film, however, strictly deals with the 12 Zodiac Temples arc for those who have already seen the tv series. With the running time as 100 minutes, changes are expected as well as trimming the storylines. Some of them worked well, some of them didn’t.

For those who don’t know, Legend of Sanctuary starts 16 years ago when Sagitarius Aiolos (Morikawa) saves baby Athena from getting murdered by the Sanctuary Pope and died in his mission. Prior to his death, Aiolos pulls a Maleficent on us (sort of) and says that on her 16th birthday, assasins will come for her and that she will need to learn the truth about herself [see: the baby is the reincarnation of goddess Athena] and will need the protection from her Zodiac saints.

Flash-forward to present day, Saori Kido/Athena (Sasaki) gets attacked during her 16th birthday and Bronze saint Pegasus Seiya (Ishikawa) successfully defends her along with fellow Bronze saints Cysnus Hyōga (Ono), Dragon Shiryū (Akabane) and Andromeda Shun (Okamoto); the latter has a brother named Ikki (Nojima), who is pretty much a loner and the Phoenix Bronze saint. Unfortunately, a second attack on Saori turned out to be successful, which leads her to investigate the reasons of the attacks along with her Bronze saints. This leads them towards the Sanctuary and triggers a battle for the world’s salvation.

First of all, I saw this wth the Spanish dub. Sadly, this deprived me from hearing Seiya saying “Pegasus, Ryu Sei Ken!” (Pegasus Meteor) which sounds far more exciting than “¡Meteoro de Pegaso!”, but the Mexican dubbing thankfully omitted the cheesy “¡Dame tu fuerza, Pegaso!” line. While the Mexican dubbing made Seiya come across on-screen as “Hiccup [1] meets Donkey” [2] given the translated lines, Deathmask/Cancer (Hirata) gets the “Jack Skellington [3] meets Jim Carrey” treatment, which actually fitted the character smoothly given how he was portrayed (and translated) on screen, in particular with his musical intro scene that might be one of the film’s highlights.

Speaking of Deathmask’s intro scene, that’s not the only big change seen in Legend of Sanctuary. While the most noticeable things are the fast pacing and Scorpio Milo’s (Asano) gender-switch as well as Deathmask being sort-of comical — he got topped by a unintentionally funny scene in the final battle involving Seiya — we also get to see new match-ups and Saori not getting the Sleeping Beauty treatment, yet her life is on the line just like it was in the original series.

The biggest problem with Legend of Sanctuary has to do with adapting the Zodiac temples arc into a 100-minute film. You had to expect a lot of chopping here, but the chopping in Legend of Sanctuary makes Steve Kloves’ screenwriting for the Harry Potter films look amazing by comparison. Almost every Bronze saint except for Seiya felt underdeveloped despite the screenwriting getting the brief gists of the characters and the main story right for the most part. The characters who suffer the most with the new changes are Shiryū and Ikki. For the former, it’s the absence of a vital character in his life that made important his survival. For the latter, he’s barely used in the film despite his connection to Shun.

Visually speaking, the film is pretty great despite its low budget and the new Sanctuary’s design seems inspired by the God of War videogames as well as its already-known Greek mythology.

If you’re new to the Saint Seiya series, you’re better off ignoring this one. For older fans, however, Legend of Sanctuary will be either hit or miss. I found most of the changes not being a problem at all, but the screenwriting adaptation is quite rough to sit through despite all the good moments in the film.