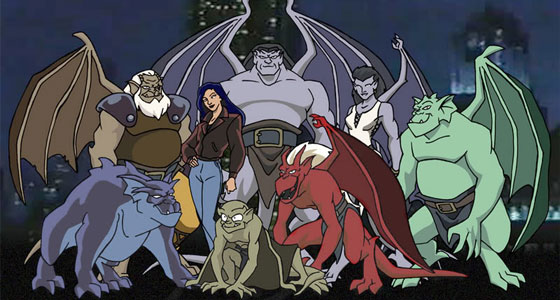 We are defenders of the night!
We are GARGOYLES!

Back in the 90s, Disney for TV was mostly cute adventures with talking animals… and then came Gargoyles.

The story was about a species of winged humanoid creatures that are nocturnal. Very nocturnal. They turn to stone at sunrise no matter what they are doing or where they are. Once there were lots of them, of very different kinds, all over the world. Now, thanks to us humans, there are but a few. And while in the course of the series we meet some of these gargoyles from all over the world, the main plot is about this very small clan that once thrived in Scotland a thousand years ago. Now they are in Manhattan, where they try to adapt to modern times and protect this new home. The core of their backstory is best explained in the series intro, narrated in clan leader Goliath’s awesome voice.

The Manhattan clan was originally made of six gargoyles: Goliath, the leader; Hudson, former leader and now old mentor; Brooklyn, one of the young ones who will become second-in-command; Broadway, the strong and big youngster with a huge heart (and appetite); Lexington, the smart and small one of the young ones; and Bronx, the one that looks/acts like a dog (I still don’t know how that works). Then there’s Elisa Maza, the non-gargoyle member of the clan, a police detective who befriends them, helps them adapt to this world, gives their life new meaning, starts a “will they or won’t they” relationship with Goliath, and apparently hardly sleeps. Later in the show, there will be a seventh gargoyle in the clan, a female called Angela, who turns out to be Goliath’s long lost daughter.

Then there’s the huge catalogue of villains/antagonists that come in all shapes: millionaires, evil gargoyles, terrorists, evil clones, gangsters, evil scientists, hate groups, evil magical beings, bitter citizens, evil wizards, and even a king of old lore. But there were two main antagonists: a human and a gargoyle.

The first one was the millionaire David Xanathos, and he is the reason the gargoyles woke up in 20th century New York. He is like an amoral Tony Stark: rich, smart, charismatic, and even has a flying red armor. This magnificent bastard is not evil per se, but mostly Machiavellian, and sometimes he sided with the gargoyles (or asked for their help) if it fitted his needs. He was voiced by Jonathan Frakes. Yup, Xanathos was William Riker from Star Trek: The Next Generation.

The other main antagonists was the gargoyle Demona. Once part of the main gargoyle clan, she was Goliath’s former lover and the mother of Angela. And she hates humans and blames them for the fall of her species in general and her clan in particular, conveniently forgetting she’s part of the reason her clan was wiped out and the survivors got turned into stone for a thousand years. Continuing with the Marvel similes, she’s like a female Magneto. And she’s also voiced by a Star Trek: The Next Generation actress: Marina Sirtis, or Deanna Troi for the trekkies.

In fact, there were many Star Trek actors here and there as recurring cast members and guest stars during the whole run of the series.

But why was Gargoyles so good? Because unlike many cartoons of the day, it didn’t talk down to the children. It had deliberate arcs, complex plots, character growth, and tons and tons of secondary characters, and even those were mostly fleshed out. It also appealed to the geek heart, and not only the trekkies, with many sci-fi and fantasy elements mashed together yet still very distinct from each other, where there’s hidden technology so advanced for the 90s (or even this era) and all myths are true.

Gargoyles ran for three seasons. But it was the first two that I remember the most. And actually, the first two are the ones most fans consider canon, since the third one was made without the involvement of the creator, Greg Weisman, and had a whole new team of writers. You can tell the difference in the tone. It certainly wasn’t as good as the first two seasons.

Finally, I must say I blame this show for both my Anglophile ways and my love for New York. It also made me fall in love with Shakespeare all over again. So yes, Gargoyles was one of my favorite shows from the 90s, and watching it again online, I must say, it has aged quite well.