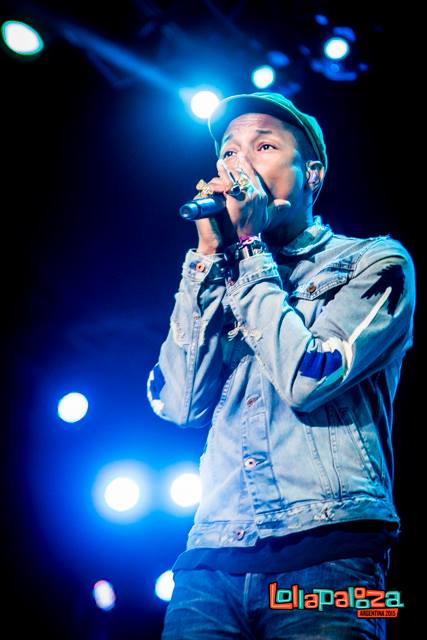 *Note: This song got played twice in a row.

Prior to Smashing Pumpkins finishing their act, the Colombian folks and I headed towards the stage where Pharrell Williams would do his live act. Before he played live, a girl and I went to the bathrooms for a piss break and we thought we could meet up with the rest of the group by seeing their flag. Somehow, the flag was never raised — while Bolivia, Spain, Brazil, Venezuela and more countries’ flags were seen — and we decided to get closer to the stage instead just in time to see Pharrell closer. She met her friends shortly after Skrillex began his gig.

Despite a cold start with Come Get It Bae, I managed to get myself quickly hooked to Pharrell Williams’ gig once Frontin’ kicked in. At that point, Lollapalooza Argentina 2015 literally became a dancing party from start to finish between Pharrell, Major Lazer — who was playing live at the electronic stage at the same time — and Skrillex, who would close the festival.

Following Brand New, Pharrell’s dancers got their spotlight moment by dancing and twerking on stage towards different mainstream hit songs that I can’t recall at the moment — if my mind doesn’t play tricks on me, I think I heard Hollaback Girl and I’m A Slave 4 U. Anyways, I was very happy when he said he would take us down to memory lane with reminding us that he had a hand on mainstream hits such as Nelly’s Hot In Herre, Jay-Z’s I Just Wanna Luv U (Give It To Me) and Busta Rhymes’ Pass The Courvosier Part II, the latter making people jumping around like fuck for real. Check out this personal video below because nearly everyone on YouTube uploaded Pharrell’s latest hits.

“All right, I need you to put your phones in your pockets or hold them really tight because I need everybody to jump. One, two, three!”

I did the latter and captured a highly memorable moment, which ranks around my Top 5 Favorite Lollapalooza Argentina 2015 moments.

To make things much better, Pharrell took us back to N.E.R.D. territory with Rock Star, Lapdance — both songs featuring rapper T.I. as a guest star — and She Wants To Move. It reminded me of times when Pharrell first captured my attention with rock and hip-hop sounds and I never thought of him to be the massive hit-maker and producer that he currently is. Wished he could have played Run To The Sun, but I don’t think the crowd would have appreciated it, but how would I exactly know that? The musical landscape has definitely changed a lot since the past decade and Pharrell stands strongly on it as we speak. 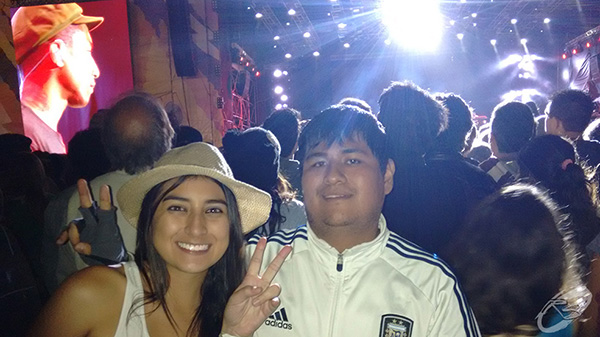 Halfway during the concert, the Colombian girl and I posed together.

2013 was a hell of a year for Pharrell Williams, especially with the major hits that skyrocketed his profile to new heights. Despite the sexist tone of Blurred Lines — for which he got sued for plagiarism accusations by Marvin Gaye’s family along with Robin Thicke and everyone involved in the making of that song — everyone danced and sang around to it, not giving a shit about the song’s content and meaning. [1] The part of the crowd near me chanted “Hey, hey, hey!” after the song ended wanting to either hear more from Pharrell, the song (which lasted less than two minutes)… or perhaps even expecting a shocking cameo from Robin Thicke of all people. That definitely wouldn’t top Robert Plant’s cameo in Jack White’s concert from the day before, but it still would have been a shocking moment nonetheless. Following the Thicke song, we got to hear, dance and sing Get Lucky (which got played twice), followed by Lose Yourself To Dance. A few songs after the Daft Punk songs, Happy played and sent everyone to a Minion-less Cloud Nine.

One minor flaw with Pharrell — or major, depending on how you feel about him — is that at times you could sense that he was aided by playback, which is a big reason why I would never see Britney Spears live unless someone either gives me a free ticket or she happens to be part of a festival that I would attend and then I’d check her out of curiosity as long as she doesn’t clash against a major favorite of mine. Still, I somehow didn’t gave a damn about that flaw in Pharrell and enjoyed this concert way more than I should have. I think he should have closed Lollapalooza Argentina 2015 instead of Skrillex just like Jack White should have closed the day before instead of Calvin Harris, but shit happens and I can’t really complain too much about my first real experience at a music festival outside of my country.

Never thought I’d have so much fun with a Pharrell Williams concert. But then again, I was surprised at times with Beyoncé during her Lima concert from five years ago.