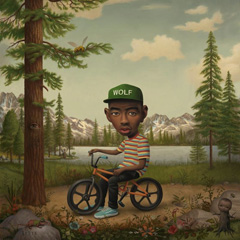 Many know Tyler, The Creator from his wild antics on Adult Swim’s Loiter Squad, where he and his OFWGKTA posse engage in all manner of complete idiocy. However, what many may not realize is Tyler, The Creator is also an unbelievable talent. As young as he is (born in 1991), he’s made a name for himself in this niche of “horror-hop”, a genre that illustrates graphic scenes of violence and sex (often times as strong as rape). His lyrics have, unsurprisingly, garnered the youngster a great deal of controversy. But Wolf is a work of pure art most may not have expected.

The album opens up with title song Wolf, a gorgeous piano and multi-instrument track (that Tyler composed and performed himself). It flows into Tyler rambling off lyrics at the top of his head. The lyrics themselves are just silly, but definitely give you an indication of where this album’s headed — “Fuck you.” Then the album goes from 0 to 120 in about twelve seconds.

The very next track, Jamba, bludgeons you with a heavy beat and lyrics that spiral and spin around you like a child riding a killer sugar-rush and hell-bent on breaking his newest toy before anyone else gets a turn. Yes, the lyrical content is still as graphic as it’s always been; however, you can’t deny his ability to write metaphor and paint tragically visceral imagery. The album follows in pretty much this same vein — graphic images used to paint pictures and tell his story. And that’s what this album does so successfully that maybe his previous efforts did not.

Tyler never loses his almost junior high school fascination with violence and sexual escapades (songs like Rusty, Trashwang, and Tamale). However, he takes most of this album to peel back the rougher parts of his life. With track Answer, we get to see where some of his darkness stems from, his desire to bend images and words to create a world for himself in which he’s in total control of everything and everyone in it. He goes into detail about the father who abandoned him, about his grandmother’s passing, and ostensibly a girl who slighted him.

Further, we get the opportunity to understand Tyler, the side that’s all emotion and vulnerability. Tracks like IFHY (MV directed by Tyler’s alter ego Wolf Haley) and Treehome95 — and by extension is inclusion of artists Pharrell, Coco O., and Erykah Badu, respectively — attest to his sensitivity and his desire to just be loved. Songs like Colossus and Lone illustrate his fantastic ability to paint expansive lyrical landscapes and expose some soul-aching pain. His lyrics are as graphic as ever, but tempered with his powerful storytelling and need to be completely honest with himself and his audience.

Those who are familiar with his earlier work are all impressed and more than a bit surprised by this seemingly softer side of the rapper. However, this is what a true artist is: someone who uses his artform to open himself to those who’ll listen without losing the essence of what it is that made people fall in love with him in the first place. Wolf is a powerful album, playful but heartbreakingly personal. This is an album that warps your sense of reality, but cuts so deeply with its lyrical content and the eerie, haunting slant of the music, the sting he places in your heart lasts weeks after you’ve turned the album off.