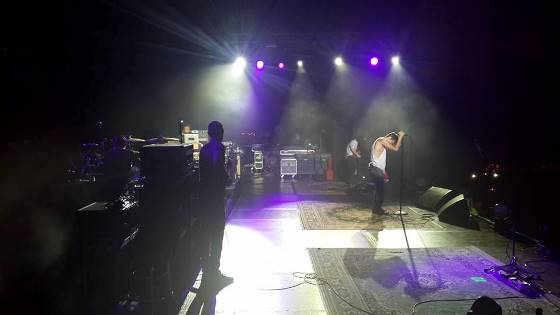 I’ve been waiting to see Incubus for years and last night my dream came true. And it’s not just Brandon Boyd’s voice that made me a fan of the band in the first place since I listened to Pardon Me years ago, their sound is usually good-to-great in spite of the multiple changes they have made over the years and it’s been many drastic changes from funk-metal Fungus Amongus (no songs were played from this album), the experimental S.C.I.E.N.C.E., the alt-metal-rock Make Yourself and its slightly softer sequel Morning View, the guitar-ridden A Crow Left Of The Murder and its sound-sequel (yet more radio friendly) Light Grenades up to 2011’s alternative soft-rock (and romantic-driven) If Not Now, When?. And seeing them live proved my point.

I arrived to the Parque de la Exposición venue with a friend half an hour before Donavon Frankenreiter, the opening act, played first. I didn’t knew anything about him until the concert, but his sound and style are pretty similar to say, Jack Johnson (I didn’t knew they were longtime friends too). He started off very well at first and won the crowd with his repertoire. However, the longer he went, the crowd anticipated Incubus more. And that countdown clock 5 minutes before the main act only amped up everyone.

Quicksand and A Kiss To Send Us Off passed through fine, but Megalomaniac pumped up the crowd and things got better later on. Most of the crowd reacted strongly to the band’s hits and either jumped around, sang or used the camera to film the band in spite of a few trees blocking the view depending on the location. Of course, people got restless with the lesser known songs, but that was a given.

The concert gained lots of momentum on Drive — Brandon even let the crowd sing the chorus and everyone delivered — and it peaked huge with Wish You Were Here, as a mosh-pit took place and people euphorically jumped around and pushed as if they were in a punk concert. Easily the highlight moment for me, and also amusing too.

By the way, I’ll admit that Dig, one of the singles I enjoyed the least from Incubus until now, sounded a lot less emo-ish live and I was able to finally enjoy that song for the first time. Even better, it was followed by classics (A Certain Shade Of Green and Pardon Me) that got me singing and feeling happy.

Other than the crowd not reacting well to certain songs that I thought most should know very well [see: Privilege & A Certain Shade Of Green], one thing that disappointed me a bit was that Brandon Boyd didn’t interact much with the crowd beyond saying “gracias” after ending the songs. With Incubus coming across as a pretty chill band, I’d expected better from Brandon as a frontman. Maybe it’s a language barrier thing. Still, the crowd had a great time anyways.