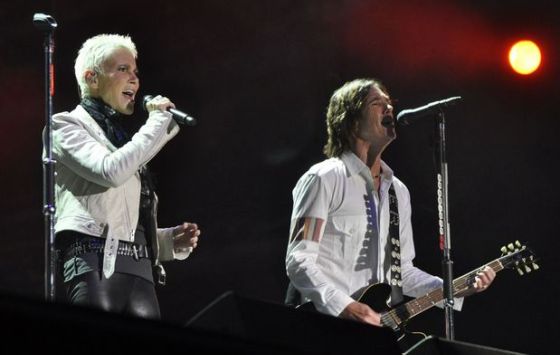 Times have changed regarding Roxette’s second concert in Lima. Back when they visited Lima for the first time in 1995 at the F.D. Roosevelt School, there were no cellphones and digital cameras available and people simply attended concerts just to have a good time and sing/dance along to the songs. [1] Nowadays, while there are still people that attend live concerts just to have fun, I could still see many people often taking pictures and filming songs during Roxette’s concert last Saturday.

Having said that, I enjoyed the concert. First, we had Argentina’s Git as the opening act. Time has taken its toll on the band, as their sound has been dialed down a bit to match Alfredo Toth’s current vocal power. Git were determined to be more than just “Roxette’s opening act” with their setlist and their stage displaying visuals/videos on the LED screens they brought shaped with the Stop, Pause and Play symblos. The crowd reacted very well to their classic songs [see: the songs that still get played on the Peruvian radios] such as Siempre Fuiste, La Calle Es Su Lugar (a.k.a. Ana, played twice) and Es Por Amor. But when it came to their lesser known songs placed in the middle of their gig, the vast majority of the crowd — obviously there for the Swedish duo — didn’t care much.

When it was Roxette’s turn to rock the crowd, Marie Frediksson and Per Gessle got the crowd engaged in the blink of an eye. Dressed for Success and Sleeping in My Car got the crowd pumped up and overjoyed to see them for the second time  — or first, in my case — playing at the National Stadium. Thankfully, there were no problems with the sound — like what happened with Red Hot Chili Peppers last year.

I really loved hearing Wish I Could Fly and I wish the crowd sang along to this, but it didn’t happen. Instead, everyone sang loudly to It Must Have Been Love — a huge moment that night — and I’m sure a good chunk of people had it pegged as their favorite moment of the night… until Per presented the band members. Guitarrist Christoffer Lundquist, who was stellar throughout the entire concert, played an amazing guitar solo of Daniel Alomía Robles’ El Cóndor Pasa and everyone went apeshit. Easily the biggest highlight of the night in my opinion, even better when Joyride followed it.

The band took a break after playing Joyride, but the encore definitely sent the fans home happy, ensuring they got their money’s worth. Marie allowed the crowd to sing Spending My Time‘s chrous and they didn’t disappoint her. The Look got the crowd pumped and Listen to Your Heart had everyone singing along. Church of Your Heart closed the show, but I wished the previous song closed it instead.

Good concert overall. Marie Frediksson’s singing live doesn’t sound as potent as it used to be years ago, but it’s admirable how she has recovered from her brain tumor and still puts on a good show for her fans with her charisma and great control of the ballads during the night.

Roxette continues with The Neverending World Tour tomorrow in Buenos Aires, Argentina. For more information, check out their official website.