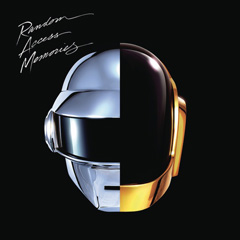 The godfathers of electrofunk have returned to their waiting fans. After eight years of silence, Guy-Manuel de Homem-Christo and Thomas Bangalter crash through the newest wave of electro and post-Disco pop to bring us something truly special.

Random Access Memories opens up with something akin to a spacecraft taking off. It may seem a bit cheesy to say so, but the album is, in fact, a space-age novelty, resembling more the soundtrack to a 70s-era sci-fi flick than simply being another notch in the electropop belt — if the cover doesn’t already attest to that. As it is, Daft Punk has always set the standard as far as experimentation with the electro genre is concerned, incorporating jazz and funk in a way reminiscent of the earliest days of acid jazz. It’s not exactly surprising that Give Life Back to Music opens the album. The very presence of the band speaks to just that — putting the nuance and spontaneity of life back into music.

The album continues to explore different genres, perhaps of an era that has long passed but will never be forgotten. Track The Game of Love has shades of Sade, favoring Sweetest Taboo, while songs like Within are more simplistic, using a piano track, or Touch using an organ and wah-wah guitar foundation and live vocal. There are even hints of bands like Jamiroquai interspersed here and there (as in song Fragments of Time, which seems to be the bridge connecting albums A Funk Odyssey and Dynamite).

One of the more overt connections to the current trend of dance music is the use of Pharrell Williams in many of the album’s more instrument-heavy tracks. Daft Punk utilizes Williams impressively, using his falsetto and his own ability to connect effortlessly to some of his biggest influences from funk and soul music. There are hints of the type of music you’d expect from the likes of Chic (it’s no surprise that Chic founder and world-respected producer/guitarist/songwriter Nile Rodgers makes an appearance on the album and the teaser for lead single Get Lucky) and the Brothers Johnson (track Lose Yourself to Dance): crisp, guitar-heavy drops of pure funk.

That’s probably what differentiates Daft Punk from every other artist out there getting attention in the ever-expanding world of electro — most notably the burgeoning subgenre of EDM. They maintain their connection to the in-studio jam sessions of old, relying more on the relationship and connection between 60s and 70s funk, 80s smooth R&B (as in tracks Beyond and Doin’ it Right), and electro.

Random Access Memories is a brilliant amalgamation of genres and subgenres, a testament to the musicianship of Homem-Christo and Bangalter. How each track falls on the album is a bit here and there — for instance, Give Life Back to Music followed quickly by The Game of Love. It sort of leaves one wondering what the direction was on the album. However, the voice of the piece is very specific. In a line from an interview with Giovanni Giorgio — which was used as the precursor to track Giorgio by Moroder — Daft Punk has one definite message: “Once you free your mind of the concept of harmony and music being correct, you can do whatever you want.”

You can listen to Random Access Memories on Xiami and Spotify. You can buy it on iTunes and Amazon (CD, MP3, Vinyl).