Blurred Lines: I Know You Want It (?) 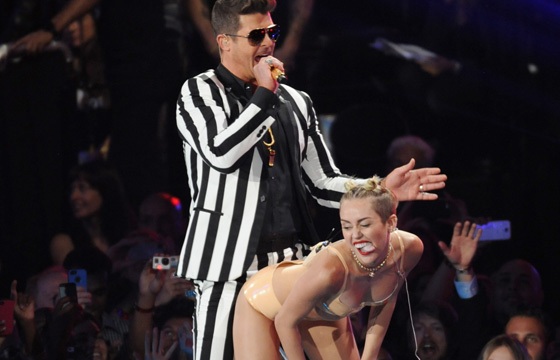 Twerking… fuck, I hate that word.

1. I could have easily played a video game or watched a film, but I was somehow bored enough (?) and ended up zapping through channels. First moment I tuned into this show was just 5 minutes before Robin Thicke performed. I’m not a fan of Thicke — the success of Blurred Lines irks me — and while Miley Cyrus involved turned this into a rampant shitfest, I kind of liked seeing Thicke jumping the shark just because . Shortly after that, I stuck around to see if N*Sync was really going to perform according to rumors around the web. Their appearance was more of a cameo: it was all about Justin Timberlake and rightfully so. And then, I changed the channel to something else.

Anything else newsworthy from the VMAs? Eminem releases a new album and that’s it for me.

That’s still a poor excuse, right? Could have done house activities (they were done) or gone to the cinema, but I already saw The Conjuring last night (it was great) and I don’t feel like paying money to see Jurassic Park in 3D.

“If the beat’s all right, she will dance all night. Women don’t give a fuck. The nastier, the better.”

I know this refers to rap music, but this also applies to songs of any genre with beats and not just related to women, but also to guys who enjoy these kind of songs, regardless of what the singer is saying, and I’ve been guilty of this many times (who hasn’t been guilty of this in life is a liar).

I’ll give you this: Blurred Lines is catchy despite the content of the song and video that can be easily perceived as mysoginistic to women. Funny enough, the most offensive lyrical content of the song is given to T.I. (a black guy) instead of Thicke, who gets to say you’re the hottest bitch in this place at some point during the song.

3. Ratings, I guess. It’s safe to safe that this isn’t trolling because of MTV’s current audience and most, if not all, of the winners aimed towards them.

Or if I borrow Amy’s mind, maybe this was done to make Justin Timberlake look phenomenal after the trash that happened before his performance. :P

Maybe I should pull off a video ranking by the end of the year and show the world how it should be done.

Edit: Will Smith’s family was actually reacting to Lady Gaga’s performance instead of the Miley-Robin thing (but Rihanna and One Direction did). Still meme-worthy, though.