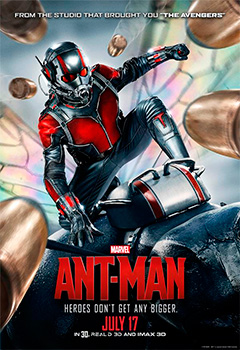 Ant-Man is about ex con Scott Lang (Rudd), a down-on-his luck father and a thief with a Robin Hood heart, who’s mentored by former Ant-Man/scientist Hank Pym (Douglas) to become the new Ant-Man. Lang has to steal back the shrinking technology from Pym’s former protégé Darren Cross (Stoll), who wants to use it for nefarious purposes.

Well, that was different. Not Guardians of the Galaxy different, but different anyway. We have in our hands our first Marvel heist movie! And also, SPOILERS, one of the few that doesn’t include the villain’s plan crashing down from the sky.

Ant-Man was such a funny movie, I almost tag this a comedy. Sure, it has a lot of innovative action sequences, and lots of family drama that make the movie feel intimate, but the jokes don’t stop. Most of the “good guys” crack jokes or find themselves in funny situations. Specially, Michael Peña as Luis. He was hilarious and adorable. Not as adorable as some of those ants, but still. Yes, Ant-Man made me think ants were adorable.

In short, everybody was having fun. Even Douglas and Lilly’s characters, that had an estranged father-daughter relationship, and provided much of the drama.

Everyone except for Judy Greer, that is. Man, it’s not been a good year for Judy Greer, right? I mean, gal’s got gigs, but that’s the second time this year that I have seen her as a mom that does nothing and her roles don’t explore her humor potential. Amirite, Jurassic World?

As for the bad guy, while Marvel still has problems making memorable villains, Stoll did a commendable job as a slightly unhinged Cross/Yellowjacket.

Other notable cast members include Anthony Mackie reprising his role as Falcon in an entertaining and action-packed scene, the classical Stan Lee cameo, and tiny roles for Hayley Atwell and John Slattery as Peggy Carter and Howard Stark, in order to show Hank Pym’s relationship with S.H.I.E.L.D. back in the day. Not that the movie doesn’t name-drop the Avengers and the happenings of Avengers: Age of Ultron to make it even more connected to the MCU. That said, OMG that scene in the past, not only we get a better aged Atwell as Peggy Carter, but the digital de-aging of Michael Douglas as young Hank Pym is nearly flawless and way better than other de-aging technology seen in, for example, TRON: Legacy and its Uncanny Valley version of a young Jeff Bridges.

Talking about new technology used to the betterment of the film, Ant-Man’s particular powers let us to explore new special effects (as far as superhero movies are concerned at least). And boy, shrinking effects have gone places since Honey, I Shrunk the Kids or Chapulin Colorado using his “pastillas de chiquitolina”! In that regard, many scenes, including fight scenes, were visually interesting, even stunning.

While it wasn’t a great movie, Ant-Man was a good movie, and a good addition to the MCU family. I appreciate the risks taken and I hope they pay off as well as they did in Guardians of the Galaxy. But I just wish Disney/Marvel let themselves take even more chances, and so I still wonder what Edgar Wright would have done with this film.

As with all Marvel movies, don’t leave after it’s over! We have one mid-credits scene and one after-credits scene! First is an introduction to a new character in (hopefully) future Marvel movies, and the other is directly related to Captain America: Civil War.