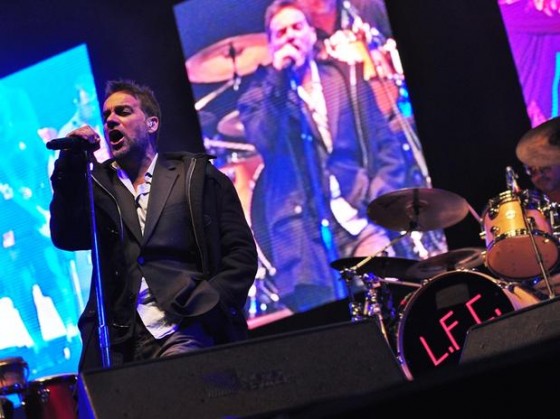 It’s been a long while since I have attended a concert [1]. While I still feel like killing myself for missing Jamiroquai earlier this year, I finally decided to end this concert-less thing and ended up seeing Los Fabulosos Cadillacs at the National Stadium with a foreign friend whom I met at work this year.

Just a day before it all began, I read on Publimetro that there would be 7 opening acts playing before Vicentico and LFC would play at 11:15pm. Based on that information, we decided to kill time and visited the Circuito Mágico de Agua at the Parque de la Reserva [1] — a first for her to see the water-themed park, and a place I’d suggest anyone to check out if you’re staying at least 1 day in Lima before going out to the more tourist-friendly Peruvian cities such as Arequipa and Cusco (LFC played there recently before coming to Lima again). By the time we decided to enter the stadium, we missed Peru’s La Mente and just caught Uruguay’s No te Va a Gustar finishing their act with Fuera de Control. I can’t really provide a proper thought about them or La Mente — Los Mostos Verdes and Chapillacs were somehow absent from the show for reasons I don’t know yet — but what followed is the part that I really saw and enjoyed the most.

After finding a spot to see the rest of the show, it was time for The Wailers to delight the crowd. Is This Love got them pumped, singing and smoking weed. They played a few other songs and they closed their act with I Shot the Sheriff. We were both very impressed with The Wailers and I might as well claim that I have now seen Bob Marley… in spirit, at least.

Following the Jamaican band, it was Miki Gonzales’ turn to pump up the crowd and he succeeded. Thankfully for some of us, no electronic songs from him, just his good old rock songs from his early days such as Vamos a Tocache and Akundún. My friend enjoyed Miki’s style and so did I, even more when I haven’t listened to his songs in quite a while, especially Chicles, Cigarrillos, Caramelos. The final pre-Cadillacs act was La Sarita — this was the only band among the show’s acts I have seen live before years ago at my university because everyone else was new to me in stage — and they were really fun and cool. While I explained to my friend about the meaning and political implications of their best known songs Guachimán and Más Poder, I wasn’t expecting them to cover Cariñito from Los Hijos del Sol. Good times were had and now everyone was ready for Los Fabulosos Cadillacs.

Manuel Santillán, El León started the show and everyone was happy and singing around. Halfway through the performance (which included a The Clash cover and a nod to The Who in Vos Sabés), however, my friend — a much bigger LFC fan than I am — asked me why people were being turned off for a good portion of the show. My easy answer: “Peru is a crowd of hits” — while I also remembered my conversation with Amy about Peruvian crowds — and then I told her to not be surprised if Mal Bicho and Matador gets the strongest reaction of the night. My country made me proud (?): Mal Bicho got the strongest reaction of the night, followed closely by Matador, which led to a very pumped and happy audience all the way to the end.

As much fun as it was for us to see Los Fabulosos Cadillacs, two things bothered me about the concert. First, Gitana wasn’t played live at all — I really hope my friend gets to hear that song live when LFC returns to Mexico in a few months. The second point, Vicentico sucks as a showman and barely interacted with the crowd at all — the other 3 acts before them actually did despite their limited performing time. LFC was all about delivering the party through their music and they succeeded in that regard. I know lots of people had the time of their lives last night, and that’s good. But as far as previous concerts experiences goes for me, this stands out to me because of the company more than anything else.