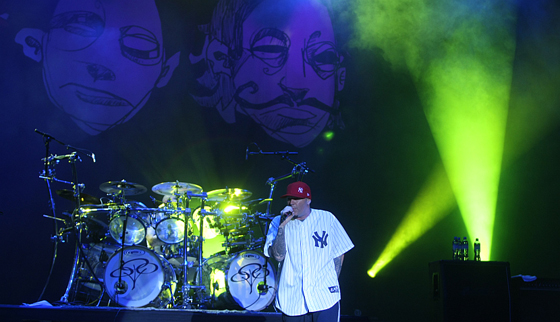 Limp Bizkit was scheduled to play their first ever concert in Peru on November 2, 2010. However, singer Fred Durst suffered neck and back injuries during a concert in Warsaw, Poland on October 9 — preventing the band from performing the rest of pending concerts until Durst was completely healed. A few months ago, Limp Bizkit rescheduled the pending Latin America concerts and the date for their concert in Peru was set for August 3, 2011.

Despite my feelings about their latest album, something about it woke up interest in me about the band again and I ended up attending the concert, which took place at the South Explanade of the Monumental Stadium — the exact same place where I saw Franz Ferdinand live last year. Unlike Franz Ferdinand’s concert, I arrived at the stadium around 5:10 pm and I saw more people in line. But that shouldn’t be a surprise, considering the popularity factor. Without a doubt, there was plenty of interest from people in seeing Limp Bizkit live. After all, many of their fans in Peru grew up listening to the Significant Other and Chocolate Starfish and the Hot Dog Flavored Water albums that made the band famous.

Peruvian band Por Hablar started around 8:45 pm and tried to get the crowd pumped. They got mixed reactions: some people enjoyed Por Hablar, some jeered them and others simply didn’t gave a fuck about them and were waiting for Limp Bizkit to play.

Around 10:07 pm, the sounds of Introbra began to take over with DJ Lethal greeting the crowd and playing beats on the turntable before the band kicked things off with Hot Dog. Bring It Back got cut off halfway through because of Durst noticing the crowd not being “awake” and then moved on to play Full Nelson. Most people really got pumped up hard, singing and jumping like crazy with My Generation and from that point, the concert turned out to be entertaining and fun.

“Fuck you means I love you.”

Fred Durst earned my respect, and in a permanent way. Very few artists that come to my country would dare to notice and mention Peruvian crowds not being really exciting [see: cameras & cellphones overuse] during the concert. When I saw Green Day live last year, Billie Joe Armstrong snapping during American Idiot was a sign confirming my thoughts and fears about most Peruvian crowds during concerts. Fred Durst did that not just once, but three times. Wes Borland didn’t seemed amused with this.

I was actually afraid that the concert would get cut off when My Way was abruptly stopped, but that ended up played again with Durst bringing a Peruvian kid to the stage wearing a Peru jacket and similarly dressed like  him [see: shorts + red cap] while he sang My Way again to the crowd’s delight. The highlight was a Peruvian manager calling out Peruvian crowds at the concert because of their lame attitudes. He even said Argentina — one of the best countries in the world for live concerts of any genre — was never quiet when Limp Bizkit played there a few days ago, and that lit the up crowd here for the encore.

Despite that, there were many moments I actually enjoyed from the Limp Bizkit concert. I never thought in my life that I would end up hearing the Party Boy Theme Song in a concert, but it happened here and not only did I laugh, but I smiled and remembered a time when I loved watching Jackass on MTV. Many things happened: beers were tossed in the air, some fans with Wes Borland-like facepaint, a couple of girls flashed their tits towards Durst, lots of jumping around, moshpits, Durst singing among the crowd during Eat You Alive, a few people kicked out of the concert by security, covers from other bands, etc.

I was very tired by the time the concert was over and my legs were hurting from jumping around, but it was a fun concert in general. It managed to reinforce my annoyance towards most people of my country during live concerts, yet Limp Bizkit salvaged it and made it worth the attendance. Many Limp Bizkit fans were left pleased, myself included. I could have done without the Metallica cover and replaced it with either Counterfeit or Shotgun, but nevermind that. Limp Bizkit culminates the Gold Cobra Tour in Panama on August 6 and I hope Limp Bizkit gets a better crowd than what they got here.