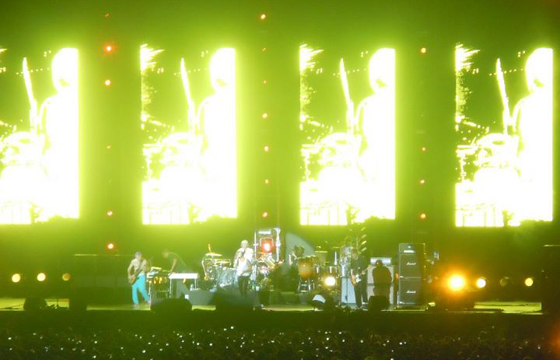 I don’t even know where to start after witnessing Red Hot Chili Peppers live in concert. I was excited and happy to finally see them playing before my eyes. However, my feelings after the concert ended were pretty mixed.

Flea and Chad are amazing musicians live. Their instrumental solos made them stand out strongly and the crowd adored them. Hearing Under the Bridge live was f*cking phenomenal and I nearly cried — that song is still very powerful and hearing it live was worth the ticket alone.

The setlist was solid — balancing their biggest hits, songs from I’m With You and other songs. If You Have to Ask was a pleasure to hear live and the percussion solo to set up Dance, Dance, Dance after the break was a highlight. RHCP live was a great act in many ways and I could go on saying why; unfortunately, the concert suffered from three problems:

First, there was your typical Peruvian concert crowd — they went crazy for By The Way, but their reception towards Higher Ground was pretty anticlimactic.

Second, John Frusciante’s absence is glaringly noticeable live. Songs like Higher Ground, Sir Psycho Sexy, Californication and Give It Away would have worked better under his hand. Josh Klinghoffer tried his best to supply for John and he worked very well for the most part, but Frusciante’s absence was still very easy to notice.

Lastly, the worst problem was in regards to how the sound came across through the remodeled National Stadium — it pegged down my enjoyment of the concert a notch. It was either way too loud or not loud enough depending on where you were located. Part of it had to do with the stadium’s new structure or it could have been because of the speakers being poorly placed around the stadium. Also, a few technical glitches happened, making Flea’s bass sound higher at times.

You can check our photos of the I’m With You concert in Stockholm, Sweden.

I also got to see UK indie band Foals live, they were the opening act for the Peppers. I really enjoyed listening to Olympic Airwaves and Cassius live. Sadly, they also suffered from the same sound problems that took place with the main act later on.

In the end, I was still glad to see Red Hot Chili Peppers live. If they ever come back to Peru, I hope for a better organized concert because they deserve better.

Red Hot Chili Peppers are still touring around South America until September 24. Then, they will be touring around Europe. Go see them live if you can. They’re still a great band.

More info about the I’m With You tour can be found at RHCP’s official website.