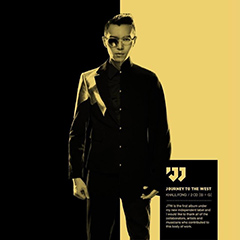 Although his Western heritage has always played a big part in his music, Asian-American singer-songwriter Khalil Fong has never made his penchant for East-meets-West fusion as clear as he has with his latest album JTW 西遊記. The name; inspired by the classic Chinese tale Journey To The West, is a double entendre which also hints at Fong and his team FU MUSIC’s efforts in introducing Chinese music to Western audiences.

Although milestones have previously been set for this type of fusion music; most notably by Wang Leehom and his ‘chinked out’ style, it has been over a decade since the latter’s’ efforts were met with resonance. To make up for lost time, Fong has released a 21-track double album with two sides; black and gold, mixing up his act in a innovative visual and musical transition that is unparalleled in his previous works.

The thing about JTW, which sets it apart from Leehom’s efforts, is that here the emphasis has been placed on the Western market rather than the Chinese. With Wang’s eponymous album Shangri-La, the aim was to truly infuse traditional Chinese instruments and melodies into Western-style arrangements. Fong however, has chosen to build his musical base on a blend of sounds that are familiar to Western audiences; then tweaking and adding Chinese influences organically. In some songs, one might hear the Eastern influence in the lyrics [see: Wu Kong and Love You So Much], in others it might have heavy influences on the arrangement [see: Flow and Drunk]; while others may have uniquely Chinese melodies [see Run from your Love and Que Sera]. This subtle approach to East-meets-West fusion has proved especially effective, given that everyone who I’ve introduced his music to has been won over by Khalil’s groovy, uniquely textured sound.

In the Black portion of the album, this is where Khalil’s mettle lies. It is quite clear to most who have heard it that this side of the album is more avant-garde and experimental than Fong’s previous traverses. Ranging from Hip Hop, to Hard Rock, to chill R&B vibes that boast an Eastern influence, Fong somehow manages this transition smoothly and without a hitch.

He starts off with Wu Kong, named after the Monkey King Sun Wukong from the Journey to the West novel series. With gravelly, rumbling beats and resounding electric guitar twangs, the song’s darker vibe sets the scene for the album. Fong borrows from hip hop’s song structure, yet in the usual rap portion adds a section of Chinese Shu Lai Bao (數來寶) before transitioning seamlessly into a rap. Keep an ear out for the story he skilfully weaves using the lyrics, which mesh narratives from Journey To The West with modern references to Jay Chou and Stephen Chow.

He follows this by one of my favorite songs in the album Flow; a collaboration between himself and Wang Leehom. I mean, what East-meets-West album would be complete without paying homage to the guy who started it all? Fong has skilfully blended all the Western and Eastern genres in a way which just FLOWS. Starting with hip hop and moving into rock and roll, this is followed by a classic electric guitar solo with Chinese Guzheng influences that delights earbuds everywhere. The electricity that comes from Wang and Fong as they bounce off each other’s energy is so infectious that one can’t help by start grooving to the beat.

Yet another highlight on the Black album was Flavor featuring Korean R&B artists Zion T. and Crush. Although this song doesn’t strictly include any Eastern influences, somehow all the different textures come together to really pack a flavorful Asian punch as per the name. From the crisp snaps to the subtle but rhythmic bass, not to mention the sprinkling of chimes and the three boys’ smooth, slick vocals, the song has a groovy atmosphere full of bite that kind of reminds me of Kimchi-sweet, sour, crunchy and bitter all at the same time [1]. Other songs I’d recommend are the sassy Ring Finger, the sultry NMW and Love You So Much and the fascinating Drunk featuring Beijing-based Mongolian band, Hanggai.

On the Gold side, Fong reverts to a musical attitude that is more classically him. Featuring an easygoing blend of funk, blues, soul, hip hop and throwing in several Chinese-influenced balladic tracks (tastefully done, mind you) for good measure, Khalil continues on his genre-bending mission.

One of my favorites was his track Run from your Love featuring British singer-songwriter Fifi Rong, whom Fong spoke highly of in our interview for Hello Asia. Building a dream-like atmosphere with a sleepy electric guitar, the song immediately had a vintage edge to it. Yet at the same time, the song’s chorus is written in the pentatonic scale to create a quintessentially Chinese sound. Rong’s voice; whispery soft yet steadfast in execution truly adds a new dimension of texture to the song, softening its vibe and bringing out its Eastern influences.

A track from the album which has grown on me recently is Fong’s collaboration with Chinese powerhouse Jane Zhang on their track Que Sera. A light R&B track, the melody adds an Eastern flare to it which entices the senses. On top of the catchy melody, I feel like Zhang and Fong’s inimitable chemistry and melismatic improvisations also grab the interest of listeners, keeping them queueing up for more time and again.

I also thoroughly enjoyed Khalil’s only fully English track on the album, As I Do, which paints a beautiful picture with its light, airy electric guitar and simple percussion. R&B that reminds me very much of Stevie Wonder. Other tracks I loved on this side include the funky All Night featuring Diana Wang, the intriguing and relevant Trouble and the fast and furious HBDD.

One qualm I have, however, is that Fong’s Black album features only collaborations with male artists, and his Gold album only collaborations with females. This kind of plays into the masculine/feminine stereotypes, with the Gold part of the album a little more soft-spoken than the Black side. It would be great in future works to see Khalil toy with these boundaries a little more adventurously.

Apart from that, Khalil’s star-studded cast of collaborators are as talented as they are culturally diverse. Spanning many different cities and states all across Asia, hailing from the Netherlands, United States, the UK, Korea, Mainland China, Taiwan; these collaborators’ cultural experiences and contexts have also added integrally to the symbol this album has become for the increasingly globalized world of Chinese and Asian music. I have seen first-hand how this album has attracted fans from all over the world, representing a big and important step for the Chinese music industry in gaining a Western following. Ten years on, Fong still serves to surprise with his innovation and consistency, presenting a timeless and experimental album which incorporates his signature affability and passion for making this world a better place.