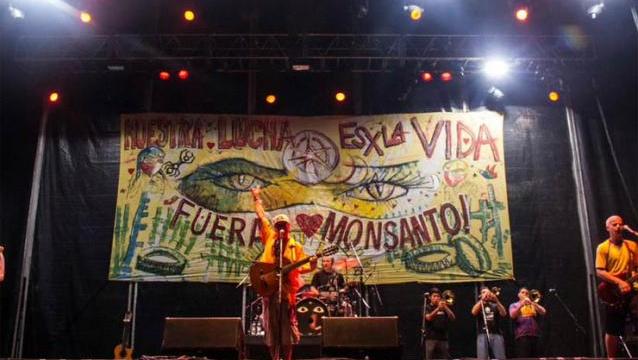 A bit more than three years ago…

Amy: Would you plan your trip around a concert, though?
Rodrigo: Nope. But plan a concert around my trip, maybe.
Amy: I almost attended a BSB concert in Vancouver, but the main reason of travel was a wedding… the trip didn’t happen though. Because visas suck.
Rodrigo: If I go to Argentina again, I’d do it definitely.

Well, my original plan during my current trip to Buenos Aires was to attend Lollapalooza Argentina 2015. However, just a couple of weeks before the trip, my friends and I purchased tickets for Manu Chao’s concert at the Ferro Carril Oeste Stadium. I had lots of interest in seeing Manu Chao live: not only I wanted to see him live, but I also wanted to see for myself how Argentina crowds act in a concert. By the way, this also ended up being my first experience at a concert outside of my country.

We arrived at the concert almost half an hour late due to traffic and an insanely lengthy line, but we didn’t completely missed out on Manu Chao’s opening medley that included snippets of Bongo Bong and Me Gustas Tú. Manu Chao also played several of his hits, including Clandestino, Desaparecido, La Rumba de Barcelona and Bienvenido a Tijuana, just to cite a few songs. Manu Chao’s concert was themed around social convictions, in particular against multinational agriculture company Monsanto as well as the Argentina government, much to the cheers and applause of everyone. This included speeches from the Qom community, the Madres de Ituzaingó group and rapper Demián Gutierres of Perro Verde appearing as one of the concert’s guests and singing Fuera Monsanto along with Manu. Lines such as “pase lo que pase, sea lo que sea, próxima estación: Esperanza” and “Fuera Monsanto” were sung often.

I really enjoyed the concert and the pumped crowd was something else to witness. Non-stop dancing, mosh pits forming, cheering on Manu and more, the crowd just wanted to have a great time and — to my own sight — they hardly ever used their cameras at all unlike every single concert I attended in Lima. I couldn’t help myself to find that really, really glorious. They make me look forward to the Lollapalooza experience.

What probably hurt the concert a bit was the final hour having a string of false finishes. The crowd still reacted very strongly to Manu Chao’s reappearances, but my brother and one of his friends as well as other fans found that pretty tiring. That aspect still didn’t took away the great time I had at the concert thanks to Manu Chao’s music and the energetic crowd.

Manu Chao plays 4 more concerts in Argentina. He will play at Mar Del Plata today, then at Nequén on March 23, two days later at Mendoza and at Córdoba on March 27.