Greetings, fellow fangirls and fanboys! This is the last column of 2014! Hope you had a nice Xmas! Seems everybody has been resting this week since there are not a lot of news, but hey we still have things to share! Here’s how the week started:

Box Office News! The Hobbit: The Battle of the Five Armies premiered in Wednesday and it seems it will totally get more than the initial predictions of $80 million or less. Congrats for the short stuff team!

Getting ready for BBC Xmas, I heard this clip from Cabin Pressure, a beloved Radio 4 comedy that will end on December 23rd with “Zurich” (they have all the episodes show titles running alphabetically from the first ever episode, “Abu Dhabi”). For those unaware, the radio sitcom is about the adventures of MJN Air, an “airdot” with a small crew composed mainly of exasperated owner Carolyn Knapp-Shappey (Stephanie Cole), prissy Captain Martin Crieff (Benedict Cumberbartch), sarcastic  First Officer Douglas Richardson (Roger Allam) and Carolyn’s son dimwit flight attendant Arthur Shappey (John Finnemore). John Finnemore is also the creator and writer of the show and had lovely things to say at the end of the recording of “Zurich”: 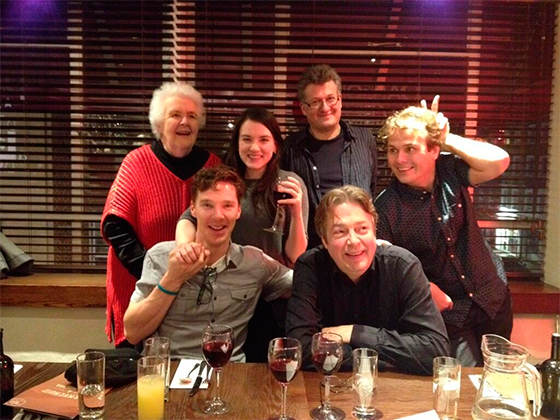 So George Clooney was Downton Abbey (and so was Mr Selfridge‘s Jeremy Piven). It was just the ITV Text Santa charity sketch done in the “It’s A Wonderful Life” style flight of fancy, with angelic Joanna Lumley showing Lord Grantham (Hugh Bonneville) what life would be like if he had never been born.

More Box Office News! The Hobbit: The Battle of the Five Armies got $355 million worldwide in 12 days! Seems that #OneLastTime transformed into #DozenLastTimes! I also that day I watched that movie for the third time~ Will probably do it #OneLastTime just before it makes its final week.