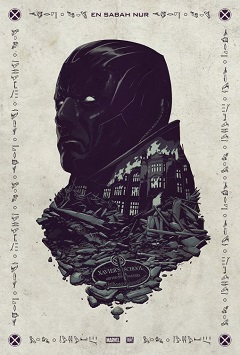 X-Men: Apocalypse starts with the origins of its titular character, letting us know that Apocalypse a.k.a. En Sabah Nur (Isaac) is the first and most powerful mutant, who since the dawn of civilization has been worshiped like a god. For many years, he has ensured his survival by absorbing powers and abilities from other mutants as well as switching host bodies when needed. However, a rebellion against Apocalypse ended up with him remaining dormant for thousands of years until he is awakened in 1983, ten years after the events from Days Of Future Past, and that’s not a good thing for mankind at all.

“You are all my children, and you’re lost because you follow blind leaders. These false gods, systems of the weak, they’ve ruined my world. No more.”

Apocalypse’s second coming leads Charles Xavier/Professor X (McAvoy) and Raven/Mystique (Lawrence) to gather a new team to put a stop to the first ever mutant before he destroys the world.

For better or worse, X-Men: Apocalypse feels quite similar to Avengers: Age Of Ultron with the handling of its main antagonist. Just like Ultron thought the world was better off without humans, Apocalypse had the same mindset. Neither of them were great film characters by any means, but Isaac’s Apocalypse comes across as being pretty uninteresting to watch as far as the character and his goal goes — blander than Spader’s Ultron — and I ended up feeling that Magneto (Fassbender) should have been the main antagonist instead of being one of Apocalypse’s four horsemen, which also include mutants such as Storm (Shipp), Angel (Hardy) and Psylocke (Munn).

The handling of the antagonist isn’t the only flaw in X-Men: Apocalypse, as we hardly see any interaction between Magneto and Xavier, which made the current X-Men trilogy get off to a great start in First Class. There’s a lack of care for most of the characters, and the biggest crime in that front goes to the resolution of Moira MacTaggert’s (Byrne) storyline, which not only worked against her, but it made McAvoy’s Xavier look like a bigger dickhead than the way said storyline began (for those who forgot about First Class, Xavier erased Moira’s memory).

In regards to the new characters introduced, good and evil sides aren’t fully developed beyond showing their superpowers in most cases, with the exception of Scott Summers/Cyclops (Sheridan), Jean Grey (Turner) and Nightcrawler (Smit-McPhee), whom are learning to embrace the world and what is to live a life as a mutant, which goes along with the allegory of the X-Men franchise showcasing minorities and their struggles via mutants. On the other hand, it was sad to see Jubilee (Condor) displayed as a glorified extra. Also, it felt quite odd to see Jennifer Lawrence and Sophie Turner’s characters feeling quite similar to Katniss Everdeen and Sansa Stark, respectively.

Despite Magneto being relegated to a secondary act and getting the reset treatment in between films, Michael Fassbender is still the best actor of this trilogy, especially when it comes to his earlier scenes with his family that leads Magneto once again into the dark side. However, the likes of Quicksilver (Peters) and Nightcrawler give Magneto a run for his money in being the standout character. Peters’ Quicksilver is not only far superior to Aaron Taylor-Johnson’s rendition of the character in Age Of Ultron, but he gets expanded airtime and a very cool slow-mo scene that is highly entertaining to watch, similar to the memorable scene from Days Of Future Past, while Smit-McPhee’s Nightcrawler is the best “new” character introduced in X-Men: Apocalypse because he comes across as a fresh presence to watch.

The above sounds like I’m pretty soured with X-Men: Apocalypse, but I didn’t hate the film. It boasts an interesting intro scene, the action scenes and special effects were pretty good, and it had some interesting bits and nods that diehard fans will enjoy, most notably with a hint at further expansion of the X-Men universe as well as a meta joke that works as a middle finger towards The Last Stand, which also works as an observation regarding the culmination of trilogies in certain franchise films. However, that joke would have worked so much better if Apocalypse was at least on the same level (or even slightly below) as its previous two installments: it’s not, sadly. You’re better off with Deadpool instead as far as 2016 is concerned with the X-Men franchise.