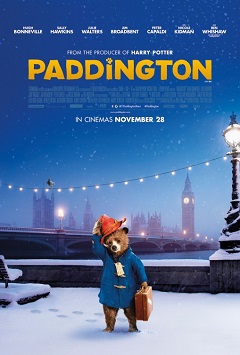 Paddington (voiced by Whishaw, replacing Colin Firth) used to live with his uncles Pastuzo (voiced by Gambon) and Lucy (voiced by Staunton) in the Peruvian jungle until an earthquake strikes the jungle, leading Paddington to flee to London (with his red hat, a blue trenchcoat and a suitcase) and locate Montgomery Clyde (Downie), whom discovered the bears, introduced them to the taste of marmalade and told them to visit Britain when they can.

“Please look after this bear. Thank you.”

Upon his arrival to London, Paddington wasn’t able to locate Clyde. However, the bear finds a new home through the Brown family: father Henry (Bonneville), mother Mary (Hawkins), their two children Judy (Harris), Jonathan (Joslin) and their housekeeper Mrs. Bird (Walters). Despite Henry’s hesitance at keeping Paddington in their house, the family agrees to help Paddington in his search for Clyde. However, Paddington’s arrival to London attracts the attention from unwanted folks, especially the Brown’s neighbor Mr. Curry (Capaldi) and taxidermist Millicent (Kidman).

I had absolutely no idea what to expect from Paddington despite the trailers indicating that it would be a straight-up family-friendly comedy film centered around a semi-intelligent Peruvian bear (with a voice) and bound to feature slapstick and silly humor tailored towards younger audiences. I was expecting this to suck, but I wasn’t expecting to actually enjoy the film for what it was by the time it was over.

While I wasn’t able to assess if Ben Whishaw fits the main character since almost every single kiddie-friendly film arrives to my country dubbed (and I missed the original language screening during the first week it premiered), it was easy to notice how the live action cast fared here. The one who stood out the most in Paddington was Hugh Bonneville, who displayed great comic timing as the well-meaning risk-assessing father Henry, whose current lifestyle (one that is drastically different from his pre-father days) clashed against Paddington’s presence. You can understand Mr. Brown, especially when Paddington floods the entire bathroom shortly after arriving to his place. The rest of the cast fared decently for the most part, but no one shined stronger than Paddington, who is the main star of his own film.

Paddington gets a bit heavy at first with the slapstick broad humor and silliness and feels pretty schmatlzy to watch, which is something you expect considering the target audience, but it cools down on it and actually becomes a balanced film between plot and humor as time progresses and we also get to see the themes of immigration and acceptance through Paddington’s stay at London. Visually, the CG animation on the bear is great and he looks so bloody cute, it’s really tough not to be charmed by him despite some of the silly humor display when he first arrives to London. Actually, the detail to visuals in almost every scene was top-notch, especially the Brown’s house which looked worthy of Wes Anderson, and the design for the Geographers Guild which looked straight out of the Harry Potter films.

A few holdbacks here includes the lack of sharpening for some of the comedic and dramatic scenes involving the bear. But I couldn’t help to feel second-hand embarrasment for Mr. Curry (he’s not Malcolm Tucker or Doctor Who, but Capaldi deserved better despite being game for his role), who was intended to be a pathetic xenophobic character. The latter is cheesy and hard to watch especially when he interacts with Kidman’s Millicent, whom resembled Cruella de Vil partially, but not as evil and great to watch as Glenn Close back in the 90’s.

Anyways, Paddington ends up being a watchable surprise for everyone despite the trailers.