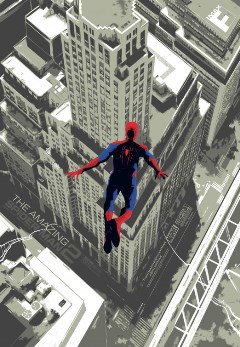 As far as the film’s title is concerned, I prefer the one that doesn’t mention Electro since The Amazing Spider-Man 2 tackles more than just one villain. Actually, it tackles 3 of them and while this makes you think that it will go into Spider-Man 3 territory, I’m glad the film wasn’t a full-fledged mess. However, it’s not better than Marc Webb’s first entry into the Spider-Man franchise since it loses its atypical approach to the superhero genre a bit as well as having other minor problems.

The Amazing Spider-Man 2 finds Peter Parker (Garfield) juggling several things in life: being the superhero of New York City, his job as a photographer, his relationships with Gwen (Stone) and Aunt May (Field)… all of this being done while trying to maintain a normal life. However, Electro (Foxx) shows up, chaos ensues and it’s Spider-Man to the rescue once again.

What makes Marc Webb’s refreshing take on Spider-Man still enjoyable to watch for me is mostly due to its cast and the relationship between Gwen Stacy and Peter Parker — aided by Webb’s indie romance background — which might be one of the strongest points of the franchise at this point thanks to how great the chemistry between Stone and Garfield is. The strong focus on the romance doesn’t mean that Webb ignores the hero because The Amazing Spider-Man 2 uses humor through Spidey’s words and actions (greatly performed by Andrew Garfield) while also having the film being a bit more action-driven this time, but that was a given considering we also get to see Harry Osborn (DeHaan) and Aleksei Systevich (Giamatti) as villains. While The Amazing Spider-Man 2 doesn’t make a mess in using 3 villains at the same time, it has some uneven treatment within its characters in terms of backstories and storylines as well as trying to tie nearly everything with OsCorp, which felt a bit overloaded even if the movie is fun to watch.

The alternative title involving Electro should have never happened considering Electro was a secondary villain in contrast to DeHaan’s Osborn, who eventually becomes the Green Goblin and has a stronger backstory involving his father Norman (Cooper) and a hereditary disease that leads him to do anything to save his life. Harry also has a past with Peter, whom also gets to learn more about his parents this time and this is vital to the film’s overall narrative as well as Peter’s own story.

On the other hand, Electro’s power gain is similar to The Lizard since he goes into “accidental work hazards creates the villain” mode. Yet, Electro’s past as OsCorp employee Max Dillon pales in comparison to Curt Connors since Max is a “nobody” (ignored by almost everyone) who became a Spider-Man fanboy and had a desire to be known. I guess Max would have been happier in The LEGO Movie, or maybe he would have gotten bored eventually. Jamie Foxx did well with his role, but DeHaan’s performance was far superior and more intriguing to watch. As far as Paul Giamatti is concerned, it’s a bit tough to assess him since he’s mostly groomed for the third film and his screentime is limited, but he works well on action scenes.

While The Amazing Spider-Man 2 culminates with the promise of more action and chaos against Spider-Man in the next film, I’m a bit worried for its future considering a certain event that happens near the end of this film and it could take its toll on the sequel. Nonetheless, The Amazing Spider-Man 2 is still a pretty good entry that should entertain the fans… or most of them, since not everyone has likened Webb’s direction.

P.S.: There’s a post-credits scene, but it’s for X-Men: Days of Future Past instead. If you’re wondering about a post-credits scene for The Amazing Spider-Man 2, you can “Shazam” the credit sequence featuring Alicia Keys’ It’s On Again (feat. Kendrick Lamar).