We finally have a director for Star Trek 3 and it is Justin Lin! Yes, the Fast & Furious director is now in charge of the voyages of the starship Enterprise! Not only that but we have a release date! July 8th, 2016! Which is great because it is just in time to celebrate the 50th anniversary of the original Star Trek series! Everything is awesome!

Agent Carter gets a new promo called “A Mission That Matters” and I am still loving everything this series seems to be!

Also, Hayley Atwell talked about the 1940’s style of the show~

I love the show’s look. It is very film noir and stylish and helps to get into character. It really is groundbreaking for network television. She wears impeccably tailored suits and dresses that were fashionable at the time. They’re elegant and formal and she matches it with red nails, red lipstick and pin-curled hair. Very different from my dressed-down style today.

It seems that Tony Stark was not the only one involved in the creation of Ultron in the MCU. According to Mark Ruffallo, Bruce Banner also had a role in that!

Banner’s been living in Stark Tower. They’ve been working side by side and Bruce has his own lab now. He’s doing work that augments Tony’s own, which could lead to an experiment going wrong…

He also commented in Bruce relationship with Natasha (“They’re kindred in some ways”), how The Hulk “doesn’t want to cede his place”, and despite all the serious business going on in Avengers: Age of Ultron, we are definitely getting “some goofy stuff”.

There was this interview with James Gunn that made some of us infer that The Avengers and The Guardians of the Galaxy may never cross paths in the MCU. James Gunn took to his facebook to clarify this~

We wanted to use them as a way to make the MCU bigger, not smaller. We wanted to make sure [Guardians of the Galaxy] have their own mythos, as opposed to only one that is intertwined with the earthbound characters [like Avengers]. They ARE connected, of course, but that connection would not be the purpose of their stories and fictional lives.

Also, there’s been questions about how Peter Quill’s Walkwan still works after so many years (and its AA batteries). LOL. Well, he clarified that one too!

GUYS, THEY HAVE THE ALIEN TECHNOLOGY TO TRAVEL FASTER THAN LIGHT BETWEEN PLANETS, I think they can figure out an alternative power source for the Walkman, and they likely also have technology to slow the degradation to the tape and player. This seems obvious to me.

Back to Marvel ladies, here’s Marguerite Sauvage’s great cover for Thor Annual #1! Yup, those are the Warriors Three’s reactions to the new Goddess of Thunder! Volstagg and Hogun look alarmed, but Fandral ain’t bothered! 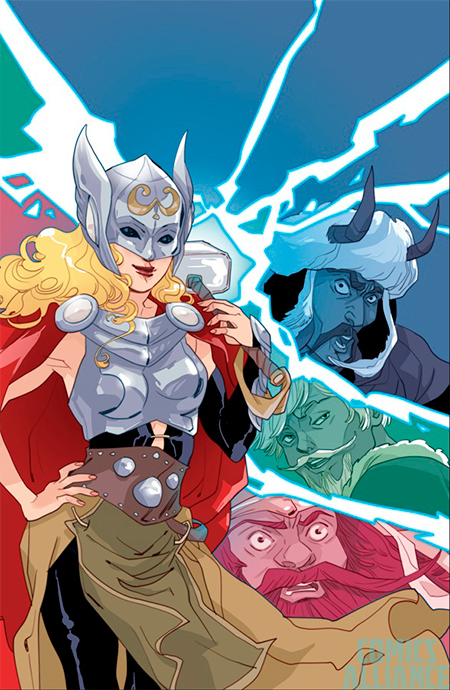