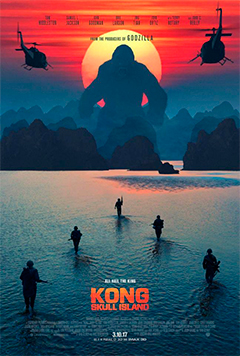 Kong: Skull Island is the second film in Legendary’s MonsterVerse, following Godzilla. It’s 1973, and we have a group of mostly soldiers and scientist going to this uncharted island, Skull Island, where they find Kong, a bunch of weird creatures… and John C. Reilly!

Just like with Godzilla, you spend most of the time with the people. But unlike with Godzilla, we managed to watch Kong from the start, and when Kong is onscreen, he’s the most badass thing ever, even during his downtime. Yep, we get to watch Kong doing Kong things. And his fighting scenes were great, specially that first sequence of his adrenaline-fueled fight with the helicopters, which gives us a Kong like we have never seen before… but it’s actually a quite logical resolution if you are a giant ape pissed off with tiny humans in their flying machines for bombing your home.

While the film is a typical summer blockbuster movie, with great action and great visuals, it has not-so-interesting characters. In fact, Packard (Jackson) and Marlow (Reilly) were the only actual proper characters, either with motivation or backstory, and the ones with some sort of character arc. They are also in charge of moving the plot along and give some exposition.

As for the others, they were mostly archetypes. Most of them were there to be killed/eaten, even if they are hints of what could be interesting and fleshed-out characters if the script were better. The reason might be that they have too many “main” characters, and while they try to give them some backstory, specially with Conrad (Hiddleston) and Weaver (Larson), it’s half-hearted at best, and some of their “best moments” are a tad over-the-top.

That said, the best characters are the titular one, that is Kong and the damn island. The set pieces in this film are amazing, as well as the general design of everything that inhabits the island. And all of these was highlighted to the best of cinematographer Larry Fong’s abbilities. All the kudos to you for making Kong: Skull Island look so breath-taking. The choice of 70s war movie aesthetics, with Vietnam era rock music included, also added in making this a very good-looking movie. The editing and story make the film seems more of a thrill ride, and not an origin story tho, even if it slowed down a bit when both groups of survivors were sepparated.

While Kong: Skull Island is a movie with obvious flaws, it delivers what it set up to do, that is giving us an entertaining action/adventure film that introduces new mythology to the franchise. I’ll give it an extra quarter star because it’s so very pretty.

PS: There is an after-credit-scene that establishes this film into the MonsterVerse.