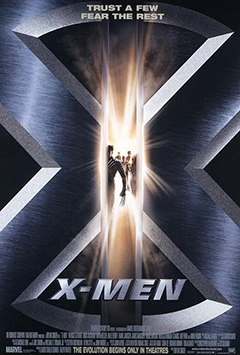 If I had to pick a Marvel (or overall) favorite superhero franchise, it would be X-Men. My history has little to do with reading the comics, but someone would fatefully give six-year-old me a (still existing) VHS tape of Pryde of the X-Men [1], the pilot episode of what would eventually give way to the awesome 90s X-Men series.

In honor of my second rewatch of Days of Future Past, I decided to give the 2000 live-action adaptation that launched this whole superhero craze of the last decade a back-to-back watch after many years of gathering dust. Bryan Singer’s first entry into the superhero canon suffers from what introduction films tend to suffer from the most: exposition. In the case of X-Men, we have a lot of characters to introduce, though not many get as good a dramatic introduction as Erik, the little boy with the power to control metal who would survive the Holocaust to become Magneto (McKellen).

As the American congress votes on whether or not mutants should require registration, Dr. Jean Grey (Janssen) does her presentation against Senator Kelly’s (Davison) lobbying for what he calls “the mutant menace,” proving to Magneto that America isn’t the land of freedom and tolerance. Taking it upon himself, he alongside Mystique (Romijn), Toad (Ray Park) and Sabretooth (Tyler Mane) plan to stand up for their oppressed brothers and sisters… by kidnapping one of their mutant fellows and using them to turn those in power into their own.

Also… Logan/Wolverine (Jackman) is a major player, but has little to do with the plot… though we see the story from his point of view and he does get a mighty character introduction that made Hugh Jackman a movie star. And that’s the problem with it, we get to meet Professor Charles Xavier (Stewart), Rogue (Paquin), Cyclops (Marsden), Storm (Berry)… we even get cameos of Kitty Pride (who has been played by different actresses until settling on Ellen Page), Iceman (Shawn Ashmore, who has managed to stay for the whole series so far) and Colossus, they all become this hodge-podge that the X-Men are. However, one thing is certain: this manages MUCH better than the mess that Spider-Man 3 tried to do.

In general terms, the visual effects are holding up except in scenes where you see the CGI Mystique sticking out like a sore thumb (which is still a negative feature in the newer entries with J.Law), though her kick-ass factor never diminishes since she is one of the only ones who can keep a great fighting scene in the series, because… let me tell you, Jean Grey, Storm and Cyclops are a bunch of nerds who are incapacitated in combat so easily. What’s so attractive of this, however, it’s how it manages to introduce talks on social issues such as discrimination/racism with talks on diversity, on top of LGBT (more explicit on X2)and Red Scare hints, that still plague our lives more than ever. To me, it trumps most of the themes in other superhero movies — except for maybe Batman — that tend to do more with identity and self-doubt forgetting what the universe surrounding them is about.

It’s also a tremendous feature to be already 14 years old and still be playing within the same universe and characters without a revamp, considering its younger cousin Spider-Man already got rebooted. As far as how this original X-Men movie plays out after the release of First Class and Days of Future Past? It makes no sense at times as linear storytelling, but it manages to be a great foundation to what Days of Future Past set out to be, and hopefully will be richer with the release of X-Men: Apocalypse. Can’t wait.