So, here’s the The Avengers: Age Of Ultron teaser that lucky bastards got to watch at the SDCC. It doesn’t show anything but Ultron’s robotic mug but, as you can realize by the screaming fans, it’s a big deal!  That’s Phase Two main movie, yo!

Talking about another other Joss Whedon project for Marvel, here’s a list of “Connections, Easter Eggs, Plot-Points” from Agents of S.H.I.E.L.D. to MCU and Marvel comicbooks! But not everyone liked it though, and we have Jim Steranko, creator of Nick Fury, Agent of S.H.I.E.L.D., saying the show needs “to be much tougher, much stranger, much edgier to reach its potential”… We do agree it needs more Nick Fury.

Talking about comicbook TV series, besides Gotham, DC wants to make a Constantine TV show! I expect this new incarnation of the supernatural detective is closer to the comicbooks than the Keanu Reeves movie. Also, what does that mean to the Guillermo del Toro’ Justice League Dark movie? (Then again, I’m still wondering about that about the future The Flash series and the Justice League movie.)

Back to Marvel, they have announced a new She-Hulk comic series. I like She-Hulk and I hope it doesn’t get cancelled after a few arcs… again. At least series writer Charles Soule seems positive and enthusiastic!

She-Hulk has always been a title where weird, cool things can happen. She is a strong — very strong — female character, and comics absolutely cannot have too many of those. There’s no reason Jennifer Walters can’t be iconic, and we’re going to do what we can to make that happen.

And we have two new Thor: The Dark World posters! Malekith and Heimdall look damn good! Actually, isn’t it weird that the best posters are for the supporting characters? As much as I love Thor and Loki, their posters weren’t the greatest, except for the one with Loki sitting on stairs. And we shall not talk about the official Thor: The Dark World posters that either look like Iron Man 3 or just seem to want to put every single character there. Nope. 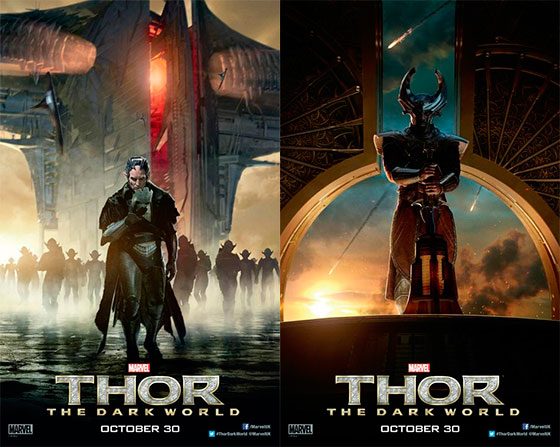 Hiddles likes Loki and Amora, The Enchantress’ twisted relationship and “even pitched it to Kevin Feige”. I am OK with that. I hope we get it on Thor 3… but I also want Surtur. Wait! We could have it all! Surtur in Thor 3 and the Loki solo movie… but with Amora! Loki and Amora screw the MCU! Yay!

Hiddles also talks about how much he loves Much Ado About Nothing, which makes me happy because I love it too. And he wants to be Benedick, Make it happen, movie powers that be!

I saw Joss Whedon’s film most recently. I grew up on Kenneth Branagh’s film. I’ve seen amazing productions on stage in London. I saw Simon Russell Beale play Benedick and it was hilarious, at the National Theatre with Zoë Wanamaker. David Tennant did it with Catherine Tate playing Beatrice. I’ve seen it set in ’30s Italy. I’ve seen it set in contemporary Los Angeles. I’ve seen it set 400 years ago. It never fails to delight. It just leaves people with a very, very happy feeling in their heart, I think.

Benedict Cumberbatch will appear once again on The Graham Norton show! Of course, this is the new Graham Norton show so… anyway! The important thing is that Harrison Ford will also be there, and if Graham did his homework, he will bring up this gem~

Also, did you know they were going to do a TV series based on Joel and Ethan Coen’s Fargo? If you did, why didn’t you tell me! Anyway, Martin Freeman and Billy Bob Thornton will be on the ten-episode series on FX.

And finally, here’s a long and nice interview with Elementary‘s  executive producer Rob Doherty apropos of the second season premiere… which was awesome, BTW. They talk about their take on Mycroft, the changes on Holmes and Watson’s relationship, and the Irene Adler/Moriarty reveal from last season.

And that it’s for the week. Before I go, let me tell you there were a lot of birthdays this week! So Happy Birthday to Stephen King, Billie Piper, Tom Felton, Bilbo and Frodo Baggins, Anthony Mackie, Pedro Almodóvar, Will Smith, Mark Hamill and Gwyneth Paltrow!