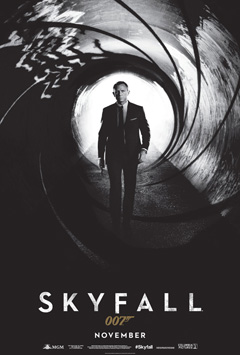 Skyfall is the best of the “Daniel Craig as James Bond” movies. There, I said it. And you know why? Because it was personal. Personal for Bond, for M (Dench) and for bad guy Silva (Bardem). Sure, the national security breach is something that affects everything on a grand scale, but Skyfall is about these three characters and their relationship.

Craig’s Bond feels more human than ever. He bleeds, he’s tired, he’s old and he fails. He also overcomes his issues with a resourcefulness that shows that he is in fact “an exemplary of British fortitude”. And whatever his character’s temporary shortcomings, Craig was in top form for the physicality the role required.

Dench’s M is still very badass, but she has also aged and she’s not infallible. Her past decisions have come to haunt her, and in Skyfall we get to see her strength as well as her frailty.

And then there’s Bardem’s Silva. Oh boy, does he have mummy issues or what? This fellow has unresolved issues with M, but he also feels a connection with Bond. He also represents modern time, using new technology, which faces off with the “old-fashioned ways” of Bond and M. He also gave me Hannibal Lecter flashbacks, and a touch of a super villain vibe that I have lately associated with McKellen’s Magneto or Hiddleston’s Loki. As much as I enjoyed Craig and Dench scenes and their respective character developments, it was Silva and his interactions with either of them that stole the show.

The rest of the cast was well balanced too. We have Fiennes as Gareth Mallory, Chairman of the Intelligence and Security Committee, who, at the beginning looks like an antagonist for what his presence means to M, her future, and the future of the MI6. Mallory might be a bureaucrat now, but it wasn’t always so. Then there’s Q (Wishaw), Bond’s new quartermaster, a young tech whiz who gives Bond quite realistic equipment. No “exploding pens” from this one.

While not exactly a Bond girl, Eve Moneypenny (Harris) fills the role of beautiful lady Bond flirts with, but she is much more than that. She is Bond’s equal and while he may want to protect her, she’s capable of making her own choices and her banter with Bond is fun to watch. A definite upgrade from the original character. Sevérine (Marlohe) is more of a typical Bond girl, who falls for Bond’s charm and whose fate, as Silva’s unwilling mistress, you will see coming.

Finally, for all the drama and action, Skyfall was very funny. Dry humor and deadpan snark, sure, but it did make me laugh out loud many times. We also got to learn some about James Bond’s past, about his life before he was 007, and how it shaped the man he is today. Skyfall is not only well-written but modern, and it fits perfectly well with the James Bond legacy and its themes.