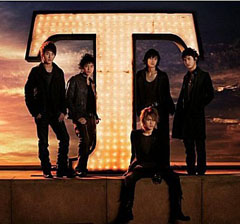 When the boys of TVXQ made their way back to Japan to work on their third offering. Fans were given some of the most mature, comprehensive pop music the group had ever released to that point. Newfound confidence and a better grasp of the language saw them take up where Five in the Black left off: mature, elegant pop that set a high standard for future pop acts to follow.

T was an enigma from the beginning. With a one-letter album title, it left much up for interpretation. The group members themselves explained the letter T stood for many things: Tohoshinki, Third (album), Top, Try, Teamwork. Further, preceding the release of the album, lead single Purple Line hit the #1 spot on Japan’s Oricon charts (the equivalent of the US’s Billboard Top 200). Such success would prove to be the norm for the group for the next few years. Throughout the album, we see just how much the pop sensibilities of their team in Japan was an amalgamation of some of the best songwriters and composers the Asian pop market had to offer.

Lead single and the track that would make them one of only two Korean pop groups to best all of Japan’s pop offerings, Purple Line, is a testament to just that. It’s a daring pop track, delving into the grittier side of pop with thumping beats and more R&B-heavy composition. With Sonoda Ryoji’s songwriting, T features some of the group’s most well-loved and most emotion-laden tracks, including TVXQ classic Love in the Ice. Indeed, the ballad remains one of the most emotional songs in the group’s catalogue, a track that’s equal parts strong composition and powerful vocal. Sonoda-san also manages to provide a great bit of that maturity prevalent in the group’s music up to this point with tracks like Darkness Eyes and Forever Love.

However, the greater percentage of the songs was contributed by songwriting team H.U.B., including the second song on the album, No? As with many of the songs H.U.B. produced for the group up to that point, No? is a track very reminiscent of R&B popular in the late 80s and early 90s in the US, borrowing from groups like New Edition. It’s also H.U.B. that provides T’s most spectacular dance tracks, being both sexy (Ride On) and easily accessible (Summer Dream, Clap!).

T also provided members of the group the opportunity to prove their talents extended beyond good looks and better vocals. Yuchun and Jaejoong showcased their lyrical and composing prowess with track Kiss Shita Mama, Sayonara. With lyrics from Yuchun and composition from both he and Jaejoong, the track was one of the more emotional on the album, providing Kpop a surprisingly competent songwriting and producing duo.

T was most certainly a launching pad into grander musical territory for the boys, providing fans a glimpse into just how exceptional their sound could be as well as foreshadowing the great success they would have when given the chance to take control of their own music. Indeed this was TVXQ right on the cusp of their golden era.

You can listen to T on Xiami. You can buy it YesAsia.