First, I saw Agents of S.H.I.E.L.D. and loved it. It wasn’t perfect but it has potential and loved all the references and I hope Cobie Smulders is back and come one Marvel don’t be cheap and pay Samuel L. Jackson to be there from time to time. Welp, that was a long and punctuationless sentence. The only thing I didn’t like at all was the character of Skye… that or the actress juts sucks. Oh well, that aside, Agents of S.H.I.E.L.D. had great ratings! Woo! It even became the highest-rated network drama debut in almost 4 years. Kudos! Here’s a sneak peek on this season:

And because DC really wants that Marvel money, there will be a Batman-inspired series on Fox named Gotham. Apparently, it’s the origin stories of Commissioner James Gordon and Gotham City villains. No Batman though. And they must have the not-well-known villains because the really fucked-up ones came with Batman… they could have made a Gotham Central, you know? That would have been cooler. Oh well, I’ll watch it.

Damon Lindelof, you know dude behind cool stories that have script problems like Lost, Prometheus and Star Trek Into Darkness, wrote about Breaking Bad, and compares Walter White/Heisenberg to Bruce Wayne/Batman. He talks about White not stopping just because his cancer went away, and he compares it to what if Batman’s parents came back from death and what would that mean to Batman’s heroing ways.

[…] Would Bruce stop being Batman? No. He would not. Because he is Batman. And once the catalyst has … well,catalyzed? There is no going back. And this is how I know the same is true with Walter White.

Also, here’s Breaking Bad fanart by none other than J. Scott Campbell, comicbook artist that I call “el manitas” because he draws dainty hands on his characters… of course, you cannot appreciate that in these busts but still! 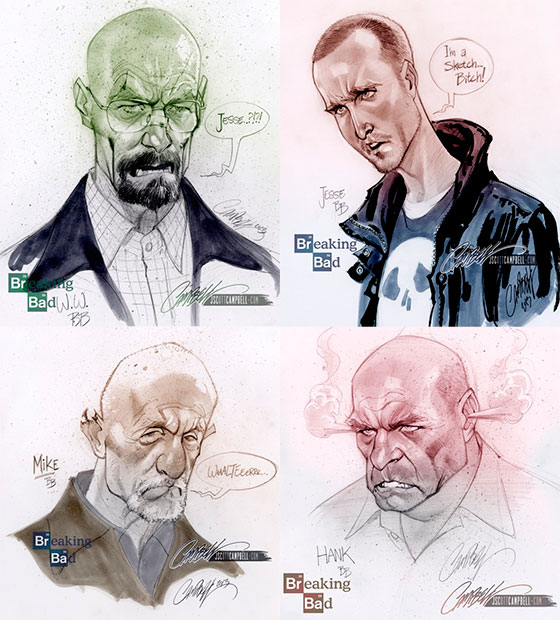 And continuing with the theme, here’s what the Breaking Bad cast has kept as souvenirs. Obviously Bryan Cranston has the famed hat and sunglasses, and Aaron Paul has been promised the burnt pink teddy bear~

Kit Harrington promises we’ll get more deaths than ever in new season of Game of Thrones! Yay?

It doesn’t get any easier this season… More deaths this season than any other! I can’t tell you who dies. You’d think they’d tone the deaths down, but they don’t. They’ve realized that’s a successful option, so they’re just killing more people than we’ve ever killed.

Bryan Fuller talks some more about Hannibal and how they don’t have the rights to Clarice Starling because MGM is being mean. But he has a plan just in case!

if we don’t get the rights to the Clarice Starling character, we will introduce a similar character, Shmarlice Shmarling, that won’t get us sued, that will give us the same dynamic that that character is. Because she’s such an important character to the canon, and it would be a shame not to get her, so we’re hoping. But that bridge is far, far off yet.

Do you remember The IT Crowd? Well, they are returning for a last ever episode! And here’s the trailer! But… just one more isn’t enough, dammit!

There’s a long-ass interview with Joss Whedon on Entertainment Weekly, where he talks about everything including his childhood, his past work, why Twilight sucks, Wonder Woman, The Avengers, and why Loki ain’t gonna be in the sequel. It’s very entertaining!

Talking about Loki, Tom Hiddleston has photographic evidence about the time he put on some muscles when he thought he might be Thor (before he was told he will play Loki instead).

I’ve never committed so much to an audition in my lifel. The guys at Marvel said, ‘Can you put on as much muscle as you can in six weeks?’ I went from 180lbs to 198lbs, and had only 7% body fat. I still have the pictures to prove it.

No. You cannot just say that and don’t show it. Don’t you know one of these day and age mottos is “pics or it didn’t happen”?

Djimon Hounsou, who will be in Guardians of the Galaxy, joins the list of black celebrities who really want to play T’Challa/Black Panther. You know, like Idris Elba and Adewale Akinnuoye-Agbaje, who are also in Marvel movies (Thor and Thor: The Dark World). I just want a Black Panther movie. Come on, Marvel!