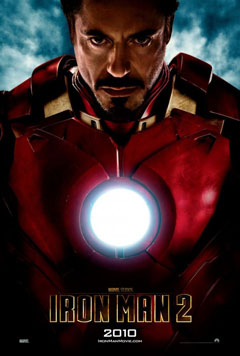 Iron Man 2 – for the ones who don’t follow anything about superhero films – follows Tony Stark after he’s announced to the world that he is Iron Man and that he’ll be the keeper of world peace, as he cockily states that he’s managed to privatize it. However, as he keeps using the Iron Man suit, his body begins a toxic transformation, as the material used to power it is… well, toxic.

So as Stark processes the idea of dying, he begins setting his business affairs in order and living his self-destructive last days. Little did he know that an enemy is ready to use Stark’s Iron Man tech to disrupt “world peace”.

Visual effects were their usual top-notch selves, except when Rhodey (played by Don Cheadle, replacing Terrence Howard) was using a suit… there was something funky with his moving and flying… maybe because it’s meant to not be as cool as Iron Man.

I was really partial to Sam Rockwell’s Justin Hammer, the corporate nemesis of Stark… and well, I’m not a fangirl so I can’t get really too excited having Samuel L. Jackson floating around in every Marvel film playing Nick Fury.

Mickey Rourke, however, as much as I could dislike him as a person and how he handles himself as a public figure, did great as villain Ivan Vanko… and was he speaking Russian for real? I don’t know if he was, or if he was any good, but it really gave that little umph to his performance.

And Gwyneth, I’ve got a soft spot for her. It still irks me a little bit how much Pepper Potts screams, but I guess that’s how the character works. Gwyneth was really funny with most of her line deliveries, and has a lot of chemistry with Downey, Jr., who is his cool funny self here.

My favorite – most surprising – moment was actually with Scarlett Johansson playing Russian non-Russian super heroine Black Widow (a.k.a. Natalie Rushman, a.k.a. Natasha Romanoff), taking on a dozen or so guards as Happy Hogan (Jon Favreau) was taking one of his own. But then again, it was because I literally burst out laughing, not because I thought it was the coolest thing ever… this is the best Johansson has looked on screen in a really LONG time.

From all this typing, it seems the film could be really good, but Iron Man 2 suffers from all the funny, as it takes center stage to the actual plot, which seems like afterthought additions after each snarky remark.