Buffy – The Making of a Slayer 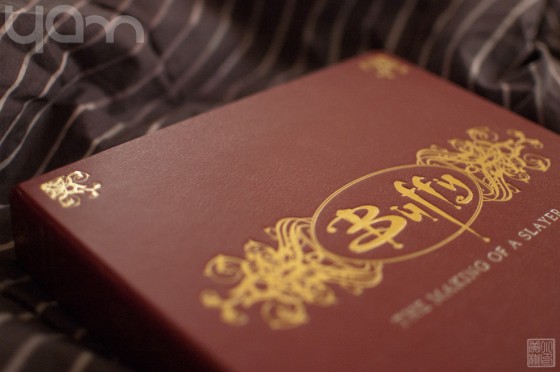 There wasn’t really a better way to celebrate December 22nd, after all the End of the World talk, than to get my Buffy: The Making of a Slayer copy in the mail. At first view, the book is quite impressive — looks leatherbound, letterpressed with golden and silver details — and when opened, it really does look like important documentation. On the left side there’s a die-cut black envelope with details in grey and deep red that contains all 11 document replicas from the show from spells used by Willow, pages from spellbooks, Sunnydale newspaper articles, and even a scary sketch of one of The Gentlemen that I totally thought was Der Kindestod, which can only mean I need a Buffy the Vampire Slayer re-watch.

The book itself is hardcover black with the title “Buffy” letterpressed with deep red and details in silver, and at the back deep red with details in a brighter shade of red and gloss coating black letters with the text:

“I’m the thing that monsters have nightmares about. — Buffy Anne Summers”

The problems begin once you open the book, though. For one, the layout of the book makes it a little hard to read, sometimes flipping to a new page divided by an insert chapter (bold in my index above) mid-sentence. The photos included are also nothing out of this world, for the most part plagued with episode and promo stills with a seldom backstage photo or quick snapshot, while the information given is nothing you’ve never heard on the DVD extras if you’ve bothered watching all the episodes with their respective commentary. In fact, Buffy: The Making of a Slayer reads more like… a recap of the series, and I gotta admit I got a little bit teary-eyed when reading the “Yellow Crayon Speech.” It’s a shame that nearly 10 years after the last episode, we couldn’t get more information on the chapters Beyond Buffy, as well as some of those academia papers written for the show.

Having said that, I’m happy that you can now reference the book quickly instead of having to pop in the DVD (if you remember the season and episode). However, nothing beats a quick Google search to end up in the Buffy section of Wikia ;P

You can get the book at Amazon.