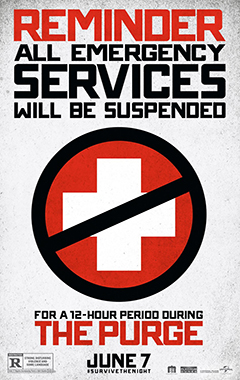 There’s a scene in The Purge where Lena Headey beats someone in the face with a gun and this physical assault is arguably the only way to explain just how unsubtle and painful James DeMonaco’s film is.

The Purge takes place in the near-ish future in a United States that has pretty much wiped out the middle class and has reached an all-time low in both crime and unemployment rates. The reason for this is that once a year, twelve hours of the day are dedicated to all crime being legal so people can essentially go wild and release their negativity.

Sure, this concept sounds like it could be the idea of a pretty decent dystopian novel. Timed events of anger aren’t all that foreign, what with Orwell’s Two Minutes Hate being around since 1984, but that’s a very different concept than the rich annihilating the poor for funsies. Did I fail to mention that the only people who actually benefit from this “purge” are the rich? Of course! DeMonaco’s brilliant writing reminds us time and time again that the rich are the only people who can benefit from such an event because they have the luxury of buying weapons, having safe homes, being friends, and ultimately being better than the poor. The poor, well, they’re poor.

The family that DeMonaco chooses to focus on is not just rich, but what we’ll refer to as Super Rich. Their neighbors establish this early on by literally complaining that they are Super Rich because they all paid  for the security system that James Sandin (Hawke) created. Turns out the security system isn’t all that great considering a bunch of people break into the house to deliver the thriller portion of this movie. It’s a shame it isn’t the slightest bit thrilling.

What makes it so lackluster is every single character and how they react to situations. Sandin’s wife and kids (Headey, Burkholder, Kane) are there to look scared, advance the plot by opening the door to a poor person, or have a boyfriend whose only purpose in the film is to die in the first act. Overwhelming predictability in a horror or thriller is your worst enemy and DeMonaco doesn’t quite realize that. He’s smart enough to have you forget a character only to bring them up to surprise you later, but when that happens over four times, you realize that maybe it’s just that every single character is forgettable.

Once the realization that not a single character is worth remembering hits you, everything else wrong with this movie starts dawning with it. There isn’t a single threatening villain in the film, which is sad considering Rhys Wakefield could have actually done something good with a juicier role. Edwin Hodge’s character only exists for to represent all the racism and class discrimination in America. If not for Burkholder, Headey, or Kane, there would be no semblance of a moral compass in this movie.

You look at these characters and wonder, “Why?” Then you stupidly check IMDB for an answer and you realize James DeMonaco was an executive producer and writer for the television series spin-off of Oscar winning Least Subtle Film Of All Time Crash, and it all makes perfect sense.

Even though you’ve survived The Purge, you’ll spend a good long time after you saw it wondering exactly why it exists – and why someone thought it was worth giving a sequel to. The saddest part though, is that the worst feeling you’ll have throughout the movie isn’t wishing that something “bad” would happen to a “good” character, but the sad knowledge that one of those bullets can’t ricochet off the movie screen into your brain to save you from this travesty.