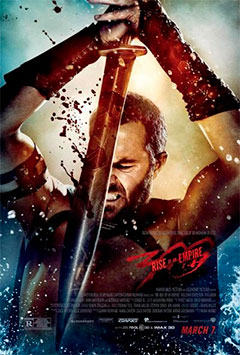 300: Rise of an Empire is a “midquel” to 300. The story starts before 300 and finishes way after 300 is already done. Those who read history books know that while the Battle of Thermopylae was made of awesome, there was something else going on simultaneously: the Battle of Artemisium. In 300: Rise of an Empire, the Athenian general Themistocles led the Pan-Grecian navy against the bigger Persian navy led by ruthless Artemisia, Xerxes’ commanding naval officer.

The story is based in a yet unpublished sequel to the 300 comicbook, named Xerxes, and starts with the end of 300, with Xerxes (Santoro) walking on the corpses of Leonidas and his small army. After that, there’s a flashback of the Battle of Marathon, ten years earlier during the first Persian invasion of Greece, where Themistocles (Stapleton) kills King Darius (Naor) with an arrow. His son Xerxes mourns his father, until Artemisia (Green) tells him to man up and become a god king. He gets a spa treatment from hell, where he gets a foot taller, super fit, hairless and covered in bling. And he begins the second Persian invasion of Greece. After that we see Athens preparations for war, that includes Themistocles visiting Sparta just after the “THIS. IS. SPARTA!” scene and learns that Leonidas has already marched with his 300. When all that backstory is mostly over and done with, we finally have what we came for, slow-mo, super saturated filters, violence and half-naked men… this time at the sea!

They certainly wanted to link both movies together, putting as many surviving character as they could in 300: Rise of an Empire, starting with Xerxes, passing through Queen Gorgo (Headey) and Dilios (Wenham), and finishing with traitor Ephialtes (Tiernan). And while they were nice familiar faces and they command our atention when they were on camera, the biggest scene-stealer in this film is Eva Green as Artemisia. She was efficient, vengeful and prone to behead her enemies. Artemisia has lust for efficient men and wants Greece burnt to the ground. There’s a backstory about that too. Artemisia was a fierce HBIC and you missed her in the talky parts when she wasn’t onscreen.

As for Stapleton, he wasn’t as good as intense Gerard Butler but he didn’t need to be. Athenians are cut from a different cloth than shouty Spartans. Still, his Themistocles wasn’t that memorable except when he kicked ass and with his interactions with Artemisia when she was the one kicking ass in many different levels. Of all his men, the only ones that stood up where the ones who actually talked, like Aesyklos (Matheson), who I think it’s the same Aesyklos that was a tragedian. There was also Scyllias (Mulvey) and his son Calisto (O’Connell).

The special effects obviously played an important part here, and it was even slightly more extreme than in 300, even if not always better. We have lots of lost limbs and tons of blood, as well as a giant moon, and high contrasts even if the blue capes didn’t work as well as the red ones. It seems that Athenians don’t believe in armor either, and they just wear leather skirts that don’t cover the crotch of their leather underwear. Of course, the best part was the insane depiction of ancient naval battles, and this movie marks the first time I have seen triremes in action, even if I am sure many fights were highly stylized. Specially that one sequence at the last third of the movie that looked like a videogame.

In the end, 300: Rise of an Empire is not as good as 300; but if you enjoyed 300, you’ll probably enjoy this movie too. Also, if this makes money, I’ll wait for the third part about the Battle of Plataea, where Greeks finally win over Persia and where Dilios was telling the story of 300.