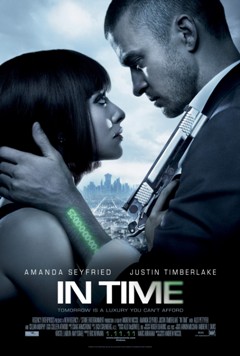 In Time showcases a world in which the aging gene is stopped at 25 and time is literally money. Need to make a phone call from a telephone booth? 1 minute of your time. Want to drink a cup of coffee? Only 4 minutes. How about a meal? That will cost you 30 minutes of your time.

But what if you run out of time? You die.

While the rich folks got plenty of time to live, the poor people living in the ghettos have to work everyday to earn enough time to live and pay for their everyday necessities. Such is life for Will (Timberlake) and his mom (Wilde), who both work their asses off every single day just to make sure they continue to exist.

In Time comes across as a retro-futuristic version of Robin Hood at first thanks to Will’s characterization throughout the film as he changes from the average poor guy to a man set to screw with the system thanks to a lucky encounter with a man (Bomer) he met at a bar, receiving 100 years as a gift. Later on, the film taps into Bonnie and Clyde mode once Will meets Sylvia (Seyfried), a rich girl who seems pretty bored with her life despite all her commodities.

Justin Timberlake actually does a good job in playing the lead role and makes you care for his character. However, his chemistry with Amanda Seyfried wasn’t good thanks to Seyfried looking very uninterested and going through the motions on almost every scene, hurting the film in the process.

There’s no denying that the premise of In Time sounds very fascinating and thought-provoking in terms of exploring social issues such as economy, morality and overpopulation in spectacular fashion. Unfortunately, the film doesn’t live up to its full potential and leaves some ideas incompletely addressed and even characters like the Timekeeper (Murphy), Sylvia’s father (Kartheiser) and Will’s father not fully explored.

And yes, there’s the inevitable overuse of the word “time”, which may feel cliché and unintentionally funny during moments. But you had to expect that going into this film anyways.

Despite what I said, In Time can be enjoyable to watch thanks to its premise, the cast it boasts and the action scenes it presents. But I wished its execution could have been a lot better- under the right direction and scripting, In Time could have been at least a 4-star film in theory.