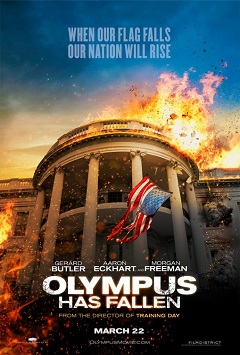 You would think that the White House is easily one of the safest places in the world and that’s very understandable. However, that’s something Olympus Has Fallen disagrees with in order to use the White House as the battleground scenario.

Before we get to the White House part of the film, the opening minutes follows lead Secret Service agent Mike Banning (Butler) serving and protecting President Asher (Eckhart), who happen to share a close friendship with Banning — the latter even gets along very well with Asher’s wife (Judd) and his son (Jacobsen). A few minutes later, however, Asher suffers a pretty traumatic Christmas Eve moment: an unfortunate snow-related accident leads to cars crashing and the President’s limo teetering on the edge of a bridge. Asher was saved thanks to Mike, but his wife didn’t.

An 18-month jump later, Mike has been relocated to work at the Treasury Department and keeping his distance from the President. Meanwhile, a political meeting between Asher and South Korean Prime Minister Lee Tae-Woo (Sim) doesn’t go as planned thanks to a staged assault/invasion of the White House done by North Korean terrorists, led by Kang (Yune), who happens to be driven by both hope [see: Korean reunification] and revenge against USA.

Guess who’s gonna save the day? Gerard Butler, folks! Who else, right?

Olympus Has Fallen is pretty much an action flick of the ‘Murrica! type as well as being a Gerard Butler vehicle. In terms of spectacle, it delivers big explosions — they looked cool — and plenty of property damage as well as lots of gun-shooting. As far as the cast is concerned, Gerard Butler fares well as the badass guy who gets a shot at redemption, Melissa Leo as the Secretary of Defense had a couple of great moments while being held captive by the North Koreans and Rick Yune proved himself to be quite menacing as the main antagonist and I think he could handle better material if given the chance. Other than those three, the rest of the cast didn’t stood out that well at all, but that was a given in Aaron Eckhart’s case since he played the “president in distress” role.

Casting use aside, the things that hurt Olympus Has Fallen the most were the uneven pacing (slow at first, then ultra-fast, then slow again and middle-paced later on) and the lack of gore and tension within most of the action scenes. Considering the massive use of gunpowder in this one as well as the initial attack being well-executed from a technical standpoint, extra tension would have done wonders for this film and this would have been better near the end of the film, which boasts the most memorable scene (and the funniest for the right and wrong reasons) involving nuclear bombs deactivation and a Twitter-associated joke. Butler’s reaction to the word “hashtag” as well as the follow-up response by Angela Bassett’s character in that scene is priceless.

Overall, Olympus Has Fallen is a pretty average and forgettable film. I’m not rating it lower because I didn’t felt hatred towards it. It boasts more than good enough action scenes for those seeking guns and explosions, but the deactivation scene will get stuck in my head for some time.