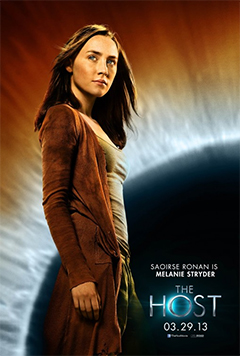 Once upon a time, there was a promising and surprising little sci-fi film named Gattaca. Writer-director Andrew Niccol seemed like he could make some great films, and he did, writing The Truman Show and bringing Lord of War to the table years after. Over a decade later, it seems like things unfortunately haven’t gone as well as they should have for him.

Last year’s bland but pretty In Time left many wary of Niccol, and with his next work being based on a Stephenie Meyer novel, things weren’t looking very good for The Host from the start. In came Saoirse Ronan and Diane Kruger, two very talented women, and things seemed like they could go well for a moment. That, my friends, was a grave miscalculation.

Standing at two hours, Niccol’s film adaptation of The Host is somehow more frustrating than actually reading Meyer’s novel, which I have in fact done. The film kicks off with a fairly interesting concept, which involves the people of Earth being taken over by a peaceful alien race known as “souls.” Melanie (Ronan), a human rebel, is caught by the souls and has a soul implanted in her body.

Due to her will to live and protect her brother, she maintains partial control of her body and coaxes the soul inhabiting it to help her return to her brother. As expected, things go downhill quickly the moment they escape, as one of the souls known as The Seeker (Kruger) is hellbent on finding her and any other human rebels.

One of the many things that’s incredibly easy to present in writing is two people talking at once within one body. You just need quotations and two names. In a movie, it’s a little harder to get right, and Niccol completely drops the ball. Saoirse Ronan acts borderline insane, with incredibly laughable voice over work and an emotional range that is limited to looking bored and scared.

Any importance to the main narrative is thrown aside for Stephenie Meyer’s favorite thing in the world: awkward romantic relationships. Coming from a person who defends Twilight to a certain extent, there is nothing redeemable about the love affairs in this movie. The Host delivers pure Stockholm and Lima Syndrome, as the films relationships involve plenty of assault and captivation, with one of the most passionate lines delivered between lovers being, “Kiss me like you wanna get slapped.”

Sure, Andrew Niccol sugarcoats things with some truly good looks, as the design, but every shiny object in the world can’t distract one from the slow, unfolding mess. Where’s the real fear in the idea of an alien invasion? Why isn’t Diane Kruger pointing and screeching a la Invasion of the Body Snatchers? Who cares about this whole late nineties WB teen drama between a girl, the other soul alien thing in her, and the two boys that love the woman and alien within her body? I’ll stick to the cheesy and reliable Roswell for my human alien relationship drama, thanks.

By the time you’ve made it through The Host, the cold realization that you wasted two hours of your life will hit you like a brick. With any luck, some alien being will already have settled in your body and the memory of Andrew Niccol’s worst film will be wiped away for good.