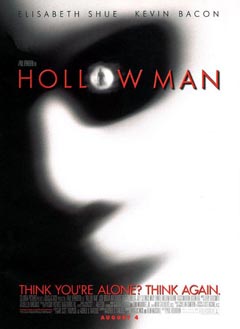 I caught a late, LATE broadcast of Hollow Man, and since I’ve been on an Elisabeth Shue movie binge, I thought I’d watch it again after first watching it at the cinema. My impressions of it are still fairly consistent, and I can still marvel at the use of CGI. But so was the use of visual effects in Verhoeven’s Starship Troopers, and he does have that cool trashy kind of taste, especially in regards to his female stars.

In here, Elisabeth Shue plays (another) scientist called Linda, but what she does isn’t as important as it is to know who she’s working with — and that’s Sebastian (Bacon) who’s a brilliant jerk of a scientist. However, unlike jerk geniuses like House or any of the Sherlocks, Sebastian lacks the sense of humor and charisma. He’s just a plain a**hole. The scientific team is rounded out by Sarah (Dickens), Carter (Grunberg), Frank (Slotnick), Janice (Randle)… who are really good for little other than assisting Sebastian in his mad experiments to become invisible.

Then there’s Matthew (Brolin), who’s also part of the team and also happens to be diddling Linda, which makes Sebastian really extra psycho grumpy. When the government tells them that they’re cutting the funding for their work, Sebastian tests his project on himself, becomes invisible and then goes completely mental.

I won’t deny it, I enjoyed Kevin Bacon being completely psycho (he plays great bad guys), and I liked seeing his mental state deteriorating as the movie progressed — sans the rape scene with Rhona Mitra, which was off-putting in how titillating it tried to be, even if it did make sense, considering his actions with the other women. It also helped that the people he was hurting weren’t all that interesting, bordering complete boredom. Though, I have to point out that I was surprised with Linda’s use of an electromagnet to escape, even if it did lead to that ridiculous third act where everyone was invincible. I really hated how Brolin’s character bounced back after being hurt and nearly frozen to death, though. I would have preferred he had died.

What’s stellar about Hollow Man, though, is its special effects. The layered anatomic effects that had veins, bones and muscles, I think they were the foundation to future effects such as the dusting of vampires on Buffy the Vampire Slayer on a very basic level. The effects of invisible Bacon are used in good measure so as not to overwhelm the picture with cheap CG shots. It’s a fun, silly, sick flick.