Haunting in Connecticut 2: Ghosts of Georgia, The 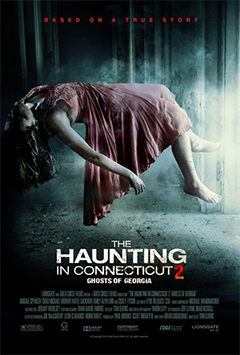 David Coggeshall’s rather colorful story introduces us to the Wyrick family: your usual white country folk who say things like, “We don’t need water, that’s what beer’s for.” Within the first five minutes or so, Lisa Wyrick (Spencer) sees a few ghosts and so does her daughter Heidi (Lind), while her husband Andy (Murray) is off getting frightened by a raccoon.

It is soon revealed that Lisa, her daughter, and even her sister Joyce (Sackhoff), have “feelings” — which are basically a The Shining rip-off, magical negro trope included with package — and that’s what lets them see these ghosts randomly. The family finds out from a local pastor that one of the most well-known station masters of the underground railroad lived in their house long ago and saved many people, but that the last owner, Mr. Gordy, was a very unfriendly man to those around the area. It is then that the family discovers that the past is coming back to haunt them, and that’s where things begin to get crazy, and the audience is treated to what a friend of mine decided to dub “white guilt horror.”

This new genre of horror is presented to us thanks to Coggeshall’s ridiculous writing. You know you’re being faced with white guilt horror when you have a black pastor explaining the history of the underground railroad to a very young white girl, who is conveniently only terrified of the black ghosts and not the old creepy white guy who she’s become best friends with. Heck, when your entire movie surrounds a white family learning to help slave ghosts because they were murdered by a crazy white man whose ghost is back, you know you’ve got white guilt horror on your hands. There’s also whole bunch of insensitivity towards anyone with mental illness, but that’s not really important to the story even though it’s just as unsubtle as the white guilt aspect.

Like most bad horror films nowadays do, this one relies on the usual boring use of bad music and jump scares to provoke a reaction out of its audience. There is barely, if any, tension built throughout the movie, and the very limited amount of violence and/or near-death experiences are unfortunately pretty boring and make no sense at all. The ghosts don’t even really look like ghosts half the time and some of the facial expressions they make are impossible to consider scary. The story even tries to bring in this wild twist near the end about who did what in the past, but it’s just as pointless as everything that comes before it and everything that happens in the film’s present.

Not everything about The Haunting in Connecticut 2: Ghosts of Georgia is completely stupid though. Director Tom Elkins and cinematographer Yaron Levy have vague ideas on what good shots look like sometimes, but considering Elkins doesn’t know how to edit, this doesn’t really matter. Every time the film awkwardly cuts to these fuzzy black and white or sepia instagram-like filters that allows the family to access their “feelings,” you realize just how poorly the film is made. Elkins doesn’t do much to direct his actors either, and nothing good comes from them. At the very least, nothing is particularly bad about their work either, but there are some pretty laughable moments.

This sequel has absolutely nothing to do with the first film of the same name, but if we’ve learned anything from The Haunting in Connecticut 2: Ghosts of Georgia it’s that white guilt horror is a thing. It’s got ghosts, bad writing, and white people feeling bad about slavery.