Don’t Be Afraid of the Dark 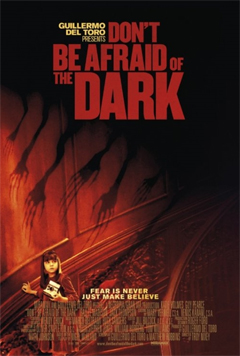 While the name Guillermo del Toro tends to bring fear and joy to the hearts of thousands, the projects he becomes attached to don’t always seem to deliver that same fear. After the anticipation built around Troy Nixey’s Don’t Be Afraid of the Dark, it’s no surprise that its release date was pushed back so often. Trust me, the title says it all. There’s nothing lingering in the darkness to be scared of. Chances are you might just end up laughing at the dark.

The haunting tale revolves around the Blackwood Manor, in which a famous artist who disappeared previously resided. Alex (Pearce) and Kim (Holmes) are two architects who have been remodeling the decrepit mansion for months, and are also in a budding relationship. Everything seems to be going well at first, but it doesn’t take long for things to take a trip down the stairs. Alex’s daughter Sally (Madison) is sent by her mother to live with her father and his girlfriend. Sally, who seems to be experiencing a bout of depression, is instantly curious about some voices in the household who continue whispering her name. It doesn’t take much time for the inquisitive young girl to find that the house has a basement that hadn’t been seen before, and was sealed off by a large doorway in the foyer. It is by opening this doorway that the small creatures that dwell in the darkness are released, ready to take Sally from her family and have her as their next meal.

It is with great displeasure that I mention how Del Toro’s writing for this is subpar. We’ve all seen stories about little girls interacting with interesting beasts, and we know that Guillermo del Toro can do fascinating things with this concept — especially anyone who has seen the marvelous Pan’s Labyrinth. So seeing this concept being utilized in such an uninspired and predictable form is disappointing. It’s not to say that all the blame for this film should fall on the script, because it certainly wasn’t too bad and there were plenty of well-written scenes. But the product on a whole is unfulfilling.

Regardless of the mediocre writing job, Don’t Be Afraid of the Dark is a horror film that isn’t particularly scary. Troy Nixey does a great job when his focus is to give the house itself an air of mystery and to establish an unsettling atmosphere. When the film begins, the mansion becomes its own mysterious character through the excellent direction and set design. Unfortunately, it seems like this is all thrown aside within the first act to focus on the monsters, and this is where our fascinating haunted house film ends. The CGI may have been well-done, but it completely takes away any of the horror aspect of the film. Unless your idea of horror is having ugly little monsters with household items running towards you, you’ll probably lose interest too. I only hesitate to say that showing them is the greatest flaw of the film because of the sheer stupidity of certain character actions due to the writing.

In terms of acting, there is some praise to go around, but not much. Katie Holmes does a fine job playing the love interest struggling with having her boyfriend’s daughter entering their relationship. Bailee Madison also does well playing the lonely girl who is terrified of the little creatures in the dark. However, the best performance is delivered by Guy Pearce, who pushes past the flawed writing and brings an interesting father to the screen.

While Guillermo del Toro may claim that this will scare audiences, the truth is that it may leave you laughing and unsatisfied. Don’t Be Afraid of the Dark, unfortunately, falls short of any expectations and ends up as just another average mid-year horror flick.