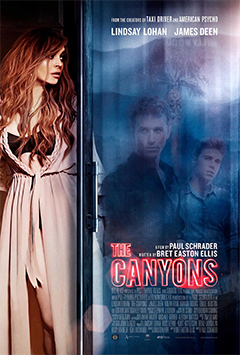 Coming up with words to describe The Canyons seems almost unnecessary when Woody Allen wrote them decades ago. There’s a scene in Annie Hall in which Alvy approaches a couple and asks them how they account for being happy, to which they reply, “Uh, I’m very shallow and empty and I have no ideas and nothing interesting to say” and “I’m exactly the same way.”

That’s it. That’s The Canyons. The words “I don’t know what you’re talking about” are brought up plenty of times throughout Paul Schrader’s low-budget film, and the truth is: no one really knows what anyone is talking about, or cares for that matter. Then again, why should a single person care about a film when its writer cares less?

Christian and Tara (Deen & Lohan) are a rather open couple, inviting others over through hook-up apps every other night, who also happen to be making a movie. The lead actor of the film is Ryan (Funk), whose production assistant girlfriend Gina (Brooks) got him the job. Little do Gina and Christian know that Ryan and Tara were once an item, which sets off a chain of events full of the same sex, lies, and violence that usually populate Bret Easton Ellis’ writing.

The Canyons is a film that suffers from two immensely conflicting views: the sleek and sexy post-American Gigolo world of Schrader and the aggravatingly nihilistic and shallow world of Ellis. The cast is just trapped in the middle, with a few of them genuinely trying to make something good out of the bad material they were given.

Right off the bat, Schrader shows he still knows how to shoot a damn fine film. While some of the color and lighting decisions are amateurish at best – the lime green in a few scenes is practically blinding – it’s the times when the film reflects his eighties work that it impresses. Even the music, courtesy of Brendan Canning and Me & John, feels right at home. However seedy the tale might be, he presents it in as stylish of a manner as he can, and a director who knows exactly how to shoot something like this is something to be appreciated.

Schrader’s biggest problem is that he faces a filmmaker’s toughest job: having to frame a narrative that slogs about and barely has anything compelling in it. Speaking as someone who enjoys Bret Easton Ellis’ earlier works, as well as Mary Harron’s adaptation of American Psycho, there was some minor hope that Ellis would make something that wasn’t a tiresome rehashing of his old work with vapid characters. This was not the case.

The Canyons is, at its heart, a real tragedy. It’s not necessarily a tragedy because of its love triangle tale, but rather a tragic show of how actors will try as hard as they can to raise bad material up to something good. Nolan Funk is undoubtedly the film’s most solid actor and does more than coast on his good looks, while Lohan’s role is cast perfectly, allowing her to remind everyone that she has the potential to deliver something great. This, sadly, isn’t that something great. And then there’s Deen. Maybe it’s to blame on Ellis’ poor writing, but his asshole persona only goes so far before he falls into a laughable Patrick Bateman rip-off.

As messy as the film is, nothing is quite as baffling as the repetitive stills of desolate, abandoned movie theaters (with constantly changing font for some reason). It’s obvious there’s supposed to be some sort of ham-fisted commentary on the death of cinema, especially with Lohan trying to deliver “do you really like movies” and “a movie that you really thought meant something to you” with a straight face, but it just doesn’t matter.

Aside from some solid filmmaking and a few decent performances, nothing in The Canyons quite matters. It’s a shame Paul Schrader didn’t write this himself and place Funk and Lohan at the forefront, because without Bret Easton Ellis and James Deen, this could have actually been an interesting tale of sex and deceit.